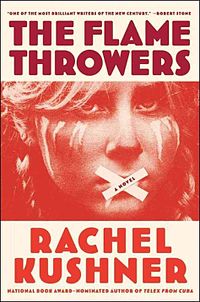 The story of a young artist and the worlds she encounters in New York and Rome in the mid-1970s—by turns underground, elite, and dangerous.

What The Reviewers Say
Rave Dwight Garner,
The New York Times
The Flamethrowers unfolds on a bigger, brighter screen than nearly any recent American novel I can remember … The Flamethrowers is a coming-of-age novel of a sort, one that has dozens of topics on its mind: speed and sex, reality and counterreality, art and intellect, politics and fear and perhaps, above all, ‘the fine lubricated violence of an internal combustion engine’ … Reno is a persuasive and moving narrator because Ms. Kushner allows her the vulnerability and fuzzy-mindedness of youth while rarely allowing her to think or say a commonplace thing … Ms. Kushner has long since burned down whatever resistance you might have toward her talent or her narrative.
Read Full Review >>
Rave James Wood,
The New Yorker
The Flamethrowers is scintillatingly alive, and also alive to artifice. It ripples with stories, anecdotes, set-piece monologues, crafty egotistical tall tales, and hapless adventures: Kushner is never not telling a story … It catches us in its mobile, flashing present, which is the living reality it conjures on the page at the moment we are reading … Kushner employs a similarly eerie confidence throughout her novel, which constantly entwines the invented with the real, and she often uses the power of invention to give her fiction the authenticity of the reportorial, the solidity of the historical … Kushner watches the New York art world of the late seventies with sardonic precision and lancing humor, using Reno’s reportorial hospitality to fill her pages with lively portraits and outrageous cameos.
Read Full Review >>
Positive Tom Bissell,
Harper's
The Flamethrowers is a political novel, a feminist novel, a philosophical novel, a sexy novel, and a kind of thriller in which most of the intrigue occurs opaquely offstage … The Flamethrowers has a fearless experiential and geographic promiscuity, traveling from the mind of a motorcyclist about to crash on the Utah salt flats to a hideous artists’ dinner in Downtown Manhattan to a Roman riot and to the night of the 1977 New York City blackout … Virtually every page contains a paragraph that merits — and rewards — rereading...you read one of Kushner’s thunderclap sentences and you remember that sometimes, in fiction, hearing the thunder means standing for a little while in the rain.
Read Full Review >>
See All Reviews >>
SIMILAR BOOKS
Fiction

Theatre of Marvels
Lianne Dillsworth
Positive
What did you think of The Flamethrowers?
© LitHub | Privacy