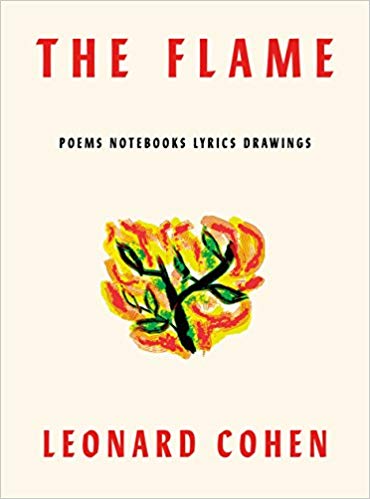 The Flame is the final work from Leonard Cohen, featuring poems, excerpts from his private notebooks, lyrics, and hand-drawn self-portraits, The Flame offers an unprecedentedly intimate look inside the life and mind of a singular artist.

What The Reviewers Say
Rave Susannah Felts,
Bookpage
When Leonard Cohen died on November 6, 2016, he left behind the writing that had consumed him in his final years, as well as a trove of journals and drawings. Collected here, this final body of work, including lyrics from his last three albums, offers a window onto the mind of one of the 20th century’s great artists, whose songs and words have helped generations of listeners and readers articulate meaning ... Sprinkled with Cohen’s self-portrait sketches, The Flame is full of gestures so intimate it’s almost a voyeuristic experience ... In perusing the sizeable volume, one can’t help but feel privy to something raw and shining, both uncomfortably and movingly revealing, the final laying-bare of a unique chronicler of the human heart.
Read Full Review >>
Pan William Logan,
The New York Times Book Review
The Flame has a little of everything for Cohen fans and nothing for anyone else ... The poems are monotonous scribbles of the moody-undergraduate school, what young Werther would have sung had he been Canadian ... Cohen favors an Audenesque quatrain with none of the puckish genius Auden used to refashion the form ... Genial, sloppy, full of conventional lines, they sometimes have little twists that save them from disaster ... Cohen could turn this stuff out all day, and it’s not half bad; but lyrics without music, even decent lyrics, look like dried lungfish in someone’s den, mounted on varnished plaques. The difference between his lyrics and poems is tissue-paper thin except when he was writing some wretched approximation of free verse ... Those who love Cohen may find in this gallimaufry the answer to their prayers. For everyone else, the only proper reaction is to shutter the windows and wait for the fever to pass.
Read Full Review >>
Mixed Alex Sorondo,
Open Letter Review
Some of Cohen’s unfinished projects are contained in The Flame, Cohen’s new posthumous collection of poems and lyrics and drawings; which, if you remember it, looks and reads like a direct sequel to Book of Longing, another decades-in-the-making project that Cohen pushed into the world in 2006, perhaps prematurely, as the first step of his comeback. The Flame is beautiful in places, incoherent and repetitive and cringingly bad in others, but it’s a delight for longtime Cohen fans who might care to see, firsthand, the writing process he so often discussed: having to write something out before he knows if it’s any good, the unruly sprawl of the first draft, the self-counseling.
Read Full Review >>
See All Reviews >>
What did you think of The Flame?
© LitHub | Privacy