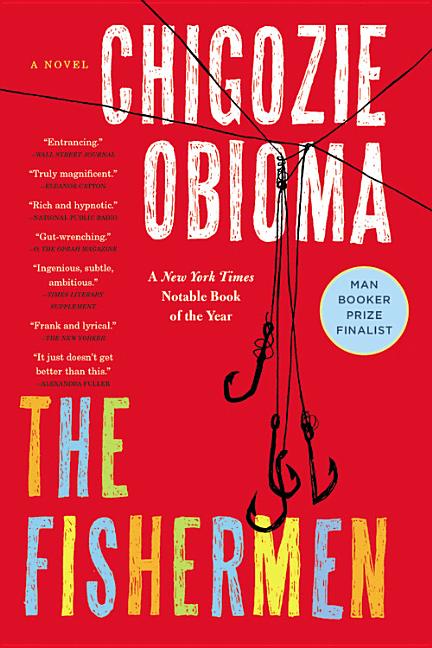 Told by nine-year-old Benjamin, the youngest of four brothers, The Fisherman is the Cain and Abel-esque story of a childhood in Nigeria, in the small town of Akure. The brothers encounter a madman whose mystic prophecy of violence threatens the core of their close-knit family.

What The Reviewers Say
Rave Fiammetta Rocco,
The New York Times Book Review
The political implications of The Fishermen are obvious, though never ­overstated. Countries can take a wrong turn, Obioma suggests, just as people can ... As things fall apart and the family’s center cannot hold, Obioma’s readers will ­begin to recall another work of fiction from Africa, a book that, after more than half a century, has never been out of print. In his exploration of the mysterious and the murderous, of the terrors that can take hold of the human mind, of the colors of life in Africa, with its vibrant fabrics and its trees laden with fruit, and most of all in his ability to create dramatic tension in this most human of African stories, ­Chigozie Obioma truly is the heir to ­Chinua Achebe.
Read Full Review >>
Rave NAOMI SHARP,
The Atlantic
One of Obioma’s most powerful decisions is to assign the role of narrator to 9-year-old Benjamin, who is at once looking back as an adult and conjuring up the perspective of his childhood self. Benjamin’s loyalty to his brothers sometimes clouds his understanding, but also makes a mythic story feel human ... Obioma never rules out the possibility of the supernatural, but the driving forces of the book are internal, not external—the push-pull of characters fighting for a sense of agency but believing all the while in fate. Some of the most striking scenes come at moments when Benjamin realizes that his brothers’ obsessions are consuming them ... Though The Fishermen reads like a parable, it offers no clear lesson. There are too many unanswered questions, or too many questions for which every answer is unsatisfying ... Obioma pulls readers beyond symbolism into a human story of personal fates and what shapes them.
Read Full Review >>
Rave TRINE TSOUDEROS,
The Chicago Tribune
The most frustrating thing about The Fishermen is that the author has no other books for the reader to devour once the final page is reached ... The Fishermen operates on several levels. On the surface, it is a story of any family's worst nightmare playing out with terrible, unstoppable momentum ... Beyond the intimate recounting of the family's tragedy, the story is a fresh rethinking of the ancient story of Cain and Abel ... The Fishermen carries a dark message — that sometimes chaos arrives in your home and takes up residence there until it destroys you and everything you care about. There is nothing you can do about it.
Read Full Review >>
See All Reviews >>
SIMILAR BOOKS
Fiction

All the Broken Places
John Boyne
Mixed
What did you think of The Fishermen?
© LitHub | Privacy