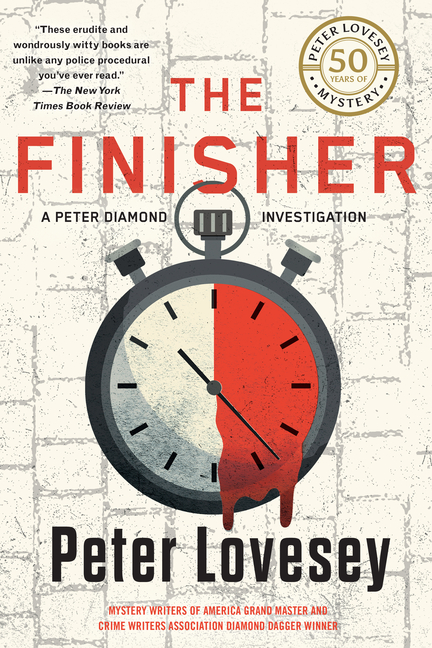 Detective Peter Diamond is tasked with crowd control during an annual half marathon in Bath, England. When he learns that one of the runners never crossed the finish line and disappeared without a trace, Diamond wonders if he has been a spectator to murder.

What The Reviewers Say
Positive Malavika Praseed,
Chicago Review of Books
The Finisher is distinct in my mind due to its integration of technology, its multiple perspectives, and its banter between characters ... As a mystery itself, it’s quite compelling and demands to be read in a single, long sitting. Where it falters, though, is in some of its literary elements. Lovesey’s characters sometimes serve as plot elements rather than full-fledged people. One character, simply known as Jones, provides a vaguely deus ex machina role in the overall story. Narratives are picked up and set aside at whim and, at times, information is withheld a little too long to be seen as believable. Some plot threads feel unresolved, especially given the amount of time we’re given with the characters in question. Perhaps the greatest detractor here, however, is dialogue. Much of the novel is spent in banter, all pleasingly British and perhaps compelling to Lovesey’s longtime fans. As a new reader, I found it distracting. We’re held in meandering conversations for pages on end ... Despite the flaws in The Finisher, I came away impressed by the storytelling, the relative pace of the plot, and of the frequent twists and turns that made this a compelling read.
Read Full Review >>
Positive Robert Croan,
Pittsburgh Post-Gazette
In a time when travel is severely limited by the pandemic, Mr. Lovesey’s descriptive passages will have armchair explorers chomping at the bit ... The author indulges in some detective story clichés that weaken his otherwise ingenious plot: a hostile (female) superior officer who impedes Diamond’s progress, an injury in the quarry that further puts the detective out of commission, and an extraneous subplot about human trafficking of Albanian refugees. These are offset, however, by vivid images of Bath’s unknown underground, along with tantalizing tidbits that bring the reader into the heart of this ceaselessly alluring ancient city.
Read Full Review >>
Rave Tom Nolan,
The Wall Street Journal
Mr. Lovesey, a veteran master of mayhem and misdirection, laces ominous suspense with wit. The Finisher showcases his enduring abilities in this, his 50th year writing crime fiction.
Read Full Review >>
See All Reviews >>
SIMILAR BOOKS
Fiction

Find You First
Linwood Barclay
Positive
What did you think of The Finisher?
© LitHub | Privacy