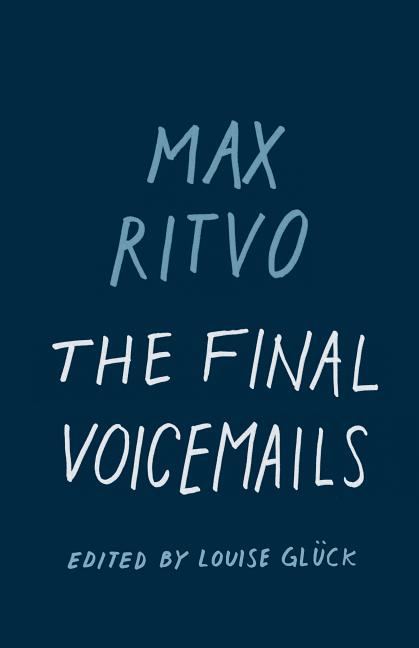 In this second and final full-length collection by a poet who died at 25 after his decade-long battle with cancer, poetry becomes a prism through which to consider the contradictory meanings of the body, spirit, human relationships, and the world of objects that make up a life. Selected and edited by the Pulitzer Prize-winning poet Louise Glück.

What The Reviewers Say
Rave Risa Denenberg,
The Rumpus
In his first book, Four Reincarnations, the speaker’s voice is somewhat tentative and the metaphors riotously elevated ... in The Final Voicemails Max’s words engage with doubt and certainty in a manner that goes well beyond mere knowledge. They convey the sort of wild and strange imagery that so many contemporary poets strive to achieve, but in these poems, there is no room for hyperbole. Max has created a sort of meta-metaphor, images that are both metaphor and simultaneously mean exactly what they say. These poems offer a surreal, in- and out-of-body candor that, at times, can be devastating to read ... Max achieves that rare conflation of desolation and exultation that may only be possible when facing death. He personifies objects, vilifies loved ones, compartmentalizes body parts, projects his emotions, shape-shifts at will, and creates characters that may or may not exist, but are humanly and inhumanly real to him, and through him, to us ... Max’s tenderness for those he is leaving behind is abundantly voiced; his playfulness and self-deprecation are brightly alive. He possesses an inner strength that blends disaster and joy in the same cup ... Max left us a legacy of wisdom in poetic reflections few have surpassed.
Read Full Review >>
Rave Dan Chiasson,
The New Yorker
The term 'voice mail' modernizes a classic understanding of lyric poetry, similar to the way Dickinson’s sense of her poems as unprompted 'letters to the world' did. Like a voice mail, a poem is a performance that anticipates a response, shaped for a specific but absent audience: by the time it reaches its recipients, the author will have moved on. But, after death, it can be 'played back' on an infinite loop, a material but fragile manifestation of voice. It is short, because we know the tape runs out ... These poems envision countless afterlives, each one more arresting than the last ... These poems envision countless afterlives, each one more arresting than the last ... Ritvo is now permanently located, and obliquely revealed, in his poems. It’s we, his readers, who come and go. When we close [this book], we miss him.
Read Full Review >>
Rave Brian Wiora,
Columbia Journal
Ritvo refuses to wade with us in our fruitless investigation on life and its supposed meaning. Instead, he gives us poetry, so affirming, so beautiful, and so mortal ... grave topics are approached with a candid humor, as comforting to the reader as it is necessary ... As the poems unfold, we gain insight into Ritvo’s complex emotional state on his impending death ... we may find these lines darkly humorous but somehow profoundly tender, as if he too is a guest to his own emotional residue ... This dichotomy between the mind and the body relays itself as a dialogue in The Final Voicemails, adventurous and casual, like close friends in the midst of several ongoing conversations. Ritvo addresses these subjects with his patented wit ... Ritvo’s humor, though, is complemented, not undermined, by his palpable struggles ... Appeals to the afterlife, both for Ritvo and the world in which he occupied, are sparingly addressed. This is not a criticism of Ritvo’s work, as these considerations often plague last books. Ritvo’s audacity as a writer comes, in this case, when the future is relayed to his present ... Death haunts this book, sometimes explicitly, and always in relation to one another. In this way, the obligation to consider death in the abstract is placed squarely on the reader ... Simply put, The Final Voicemails is required reading for anyone with a curiosity into the material of death. Or, as Ritvo writes in the poem, 'Your Next Date Alone,' 'The stage is empty./How do you fill it?/With music.'
Read Full Review >>
See All Reviews >>
SIMILAR BOOKS
Fiction

Fantasia for the Man in Blue
Tommye Blount
Rave
What did you think of The Final Voicemails: Poems?
© LitHub | Privacy