The Final Revival of Opal & Nev 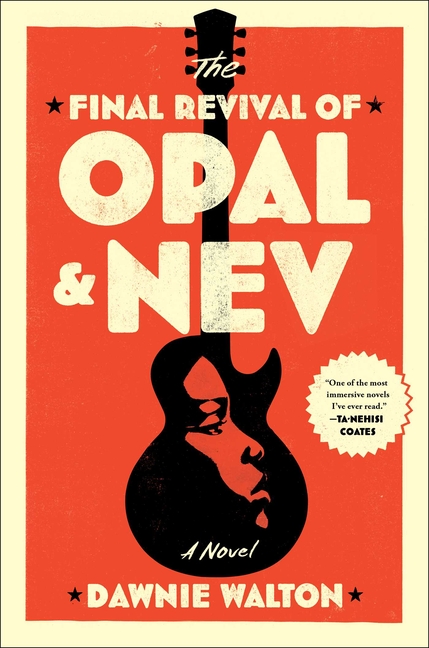 Opal is a fiercely independent young woman pushing against the grain in her style and attitude, Afro-punk before that term existed. So when the aspiring British singer/songwriter Neville Charles discovers her at a bar's amateur night, she takes him up on his offer to make rock music together.

What The Reviewers Say
Rave Alexandra Jacobs,
The New York Times Book Review
This novel is so good, I want to rent a velvet-swagged amphitheater and gather a large audience to blare through a microphone just how much I like it ... Ingeniously structured ... Writing about music is tremendously hard. Writing about fictional music is surely even harder — but with artful juxtaposition and Zelig-like placement of made-up characters with real ones (Dick Cavett!), the author has conjured an entire oeuvre of lyrics, licks and liner notes that is backdrop for some of the most pressing political issues of our era, or any era. The story Sunny 'tells' using the tools of journalism is propulsive, often funny and thought-provoking. Like the best fiction, it feels truer and more mesmerizing than some true stories. It’s a packed time capsule that doubles as a stick of dynamite.
Read Full Review >>
Rave Danielle Evans,
The Washington Post
... a dazzling triumph ... Walton brilliantly uses the unfolding story of the present to unspool the hidden story of the past ... How wonderful it is to watch Walton build that complexity, starting with Opal’s fraught music industry debut ... Opal’s confidence is hard-won and triumphant, but it’s also connected to the messier things that make her a fascinating fictional character rather than a martyr. Opal can be selfish, defensive and oblivious to what gets lost in pursuit of her own ambition or desire. The fake-documentary format gives Virgil’s and Pearl’s voices room to shine and sometimes gently push back against Opal’s story of how she invented herself ... It is refreshing to read a book that centers a Black woman who has this many layers, a book that seeks neither to save her from nor punish her for the flaws that make her human ... At times, I held my breath, wondering if the novel could sustain its tightrope act — balancing its array of voices, its fictional history with actual history, its affection for Opal with the clarity of its portrait of her, its interest in Sunny herself with the story Sunny purportedly set out to tell. The first half of the book builds to a fuller account of the climactic event in the story’s past, and I wondered whether there would be enough narrative momentum left for the second half. I worried that Sunny’s own arc, primarily focused on the challenges of being the first Black editor of Aural, a legacy music publication, might start to feel sidelined or extraneous, given that it appeared only in editorial notes between the chapters...I should have had faith: Walton structured this book masterfully. Halfway through, a major revelation about the past shifts the narrative question to the present, brilliantly spotlighting how salient history remains in a country that has never fully reckoned with racism or held its perpetrators accountable ... My only real disappointment with The Final Revival of Opal & Nev is that when I finished reading, I had to remind myself that Opal Jewel was fictional, and I couldn’t search the archives for her interviews, read more biographies, listen to her entire musical catalogue, and tell everyone I know to do the same. Still, I am grateful for this fictional account, which gives readers the chance to meet an unforgettable character and also provides a lens for considering the real-world artists whose stories have not yet been told in a way that centers them or gives them proper credit.
Read Full Review >>
Rave Leah Greenblatt,
Entertainment Weekly
Walton's debut novel uses oral history as the form for her kaleidoscopic tale, though she can hardly be contained by it. The book bursts with fourth wall breaks and clear-eyed takes on race, sex, and creativity that Walton unfurls in urgent, endlessly readable style.
Read Full Review >>
See All Reviews >>
SIMILAR BOOKS
Fiction

Mother May I
Joshilyn Jackson
Rave
What did you think of The Final Revival of Opal & Nev?
© LitHub | Privacy