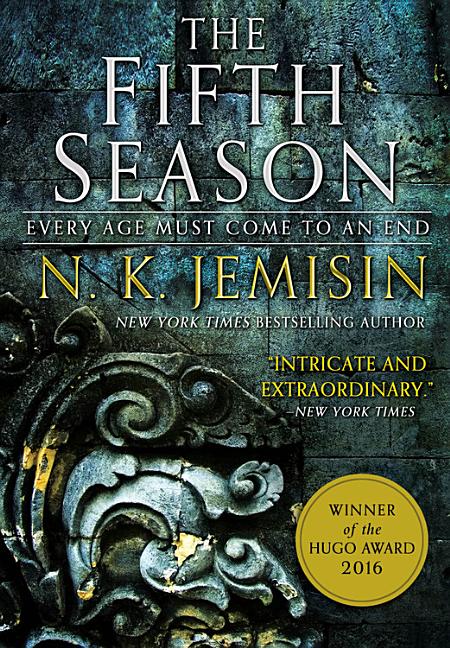 In a post-apocalyptic world plagued by natural diasters, Essun lives in a small comunity barricaded against the outside world. When her husband relizes that she and her children are orogenes with the ability to manipulate seismic energy, he kills their son and kidnaps their daughter. Against the backdrop of the end of the world, Essun follows, beginning an odyssey which will not end until her daughter is safe.
Positive
Based on 7 reviews

What The Reviewers Say
Rave Naomi Novik,
The New York Times Book Review
N.K. ­Jemisin’s intricate and extraordinary world-­building starts with oppression: Her universes begin by asking who is oppressing whom, what they are gaining, what they fear. Systems of power stalk her protagonists, often embodied as gods and primeval forces, so vast that resistance seems impossible even to contemplate. When escape comes in her novels, it is not a merely personal victory, or the restoration of a sketchy and soft-lit status quo. Her heroes achieve escape velocity, smashing through oppressive systems and leaving them behind like shed skins. ... All three narratives are urgent and deftly interwoven to reveal their far-future earth, a world that has buried our own civilization and many others in its lower strata. In this world, social oppression is an irresistible and natural force, but nature isn’t seen through a green-colored wash of sentiment. Nature is trying to kill you and every other living thing, is going to kill you, now or in a century or in a thousand years. Yet there is no message of hopelessness here. In Jemisin’s work, nature is not unchangeable or inevitable. The Fifth Season invites us to imagine a dismantling of the earth in both the literal and the metaphorical sense, and suggests the possibility of a richer and more fundamental escape. The end of the world becomes a triumph when the world is monstrous, even if what lies beyond is difficult to conceive for those who are trapped inside it.
Read Full Review >>
Rave Jason Heller,
NPR
In N. K. Jemisin's new novel, The Fifth Season, the payoff is astounding. Sure, there's a whopping glossary at the end of the book — two of them, actually — but that simply underscores how much sumptuous detail and dimensionality she's packed into her premise ... The Fifth Season isn't a straightforward book any more than it's an upbeat one, but it's stronger for that. And Jemisin maintains a gripping voice and an emotional core that not only carries the story through its complicated setting, but sets things up for even more staggering revelations to come in future installments of the series ... With The Fifth Season, Jemisin brilliantly illustrates the belief that, yes, imaginative world-building is a vital element of fantasy — but also that every character is a world unto herself.
Read Full Review >>
Positive Andrew Liptak,
The Verge
...perspective shifts effectively place the reader into Essun’s shoes, conveying her grief, anger, and triumph firsthand, rather than observing from the sidelines in a third-person perspective, or having the character tell you events in the first person. It’s a monumentally difficult task (and the shifts in perspective do mean that the The Fifth Season takes some getting used to), but it’s an incredibly effective tactic, allowing Jemisin not only to tell you the dangers of marginalization, enslavement, or oppression, but to let the reader experience it all through through the eyes of her characters.
Read Full Review >>
See All Reviews >>
SIMILAR BOOKS
Coming Soon

The World We Make
N. K. Jemisin
Positive
What did you think of The Fifth Season?
© LitHub | Privacy