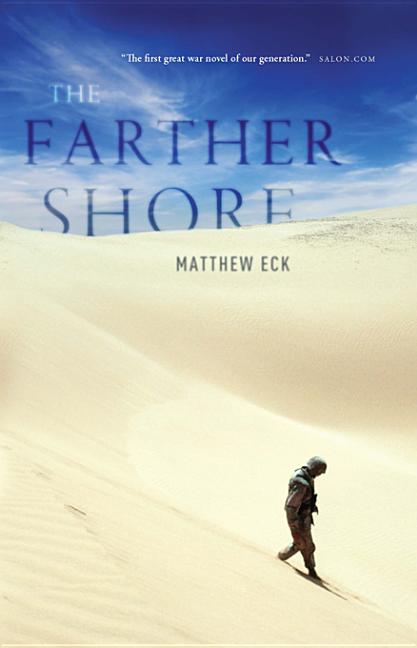 In coastal Africa, a small unit of U.S. Army soldiers is separated from its command and left for dead. Josh and his battle buddies are forced to keep moving to escape the marauding gangs that rule the area, and after a series of terrifying, violent encounters, only a few of them survive.

What The Reviewers Say
Positive UZODINMA IWEALA,
The New York Times Book Review
...one of the few creative works about the Somali conflict that doesn’t center on the downed Black Hawk helicopter and the 18 Army Rangers and Delta Force commandos who died trying to capture the warlord Mohammed Farrah Aidid ... Eck has served in the military in Somalia, and the strongest aspect of this novel is his ability to bring us straight into the devastation, all its sights and sounds whirling around us as they whirl around Stantz and his comrades ... Eck’s writing could also use more rhythm, and more emotional emphasis. Sometimes awkward and stilted, his prose can stumble over itself ... The mental landscapes Eck’s characters inhabit are mostly two-dimensional, and the reader keeps hoping to see both the Americans and the Somalis as more than mere victims of circumstance.
Read Full Review >>
Positive Publishers Weekly
Narrator Joshua Stantz recounts his wanderings with such quiet objectivity that the horrors he witnesses evoke winces and poetic details stand out in contrast ... Eck goes beyond the on-the-ground chaos of battle to capture the physical and psychological disorientation of modern war.
Read Full Review >>
Rave Kirkus
In such novels as The Things They Carried, Tim O’Brien perfected the art of nuanced war fiction. Eck follows in his footsteps, emphasizing not the drama of the soldier’s ordeal, but the painstaking, spirit-breaking, heart-wrenching details ... A harrowing work that conveys chaos, confusion and raw fear.
Read Full Review >>
See All Reviews >>
SIMILAR BOOKS
Fiction

Better Luck Next Time
Julia Claiborne Johnson
Rave
What did you think of The Farther Shore?
© LitHub | Privacy