The Factory Witches of Lowell 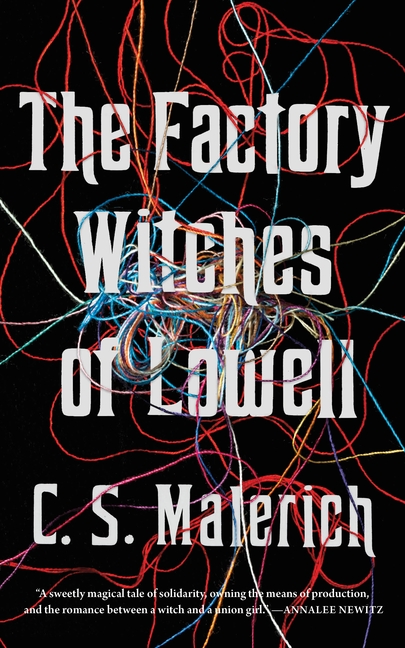 Faced with abominable working conditions, unsympathetic owners, and hard-hearted managers, the mill girls of Lowell have had enough. They're going on strike, and they have a secret weapon on their side: a little witchcraft to ensure that no one leaves the picket line. From the author of the young adult novel Fire & Locket.

What The Reviewers Say
Rave Mark Soderstrom,
The Los Angeles Review of Books
One of the most striking historical themes that the book addresses is the role of slavery in the industrial revolution of New England. Malerich’s novella acknowledges both the characters’ awareness of their own complicity in the slavery system and their distress at its toll ... Through the license granted by the fantastic, Malerich incarnates the malevolent social power of the dehumanizing system that enforces the ownership of one person by another. She goes further, to emphasize that Northern US industry depended not just on slaves but on the profound oppression that brutally suppressed slaves’ magic for retribution ... This picture is oversimplified, seeming to deny all agency to people who exerted agency consistently in ways large and small. But having a young white woman in 1836 Lowell react to slavery with such vivid horror does have an historical basis, though an incomplete one ... some of the complexity of the relationship between the free and the unfree in US history emerges in Malerich’s prose ... In our difficult political world where livelihoods take lives and laborers struggle for basic recognition, this tale about young women forming solidarity to win justice and equality is a much-needed tonic. Its modern reflection on and fantastic exploration of workers’ lives shows how powerfully fantasy can enrich readers’ understanding of the political and economic forces at work even now. At the last, though, one of Malerich’s most adroit choices is knowing when to put the fantastic down ... In its close examination of the forces in workers’ lives, the meaning of labor, and struggles for solidarity, C. S. Malerich’s book The Factory Witches of Lowell is an apt contribution to the proletarian fantastic.
Read Full Review >>
Positive Em Nordling,
Tor.com
... a charming, hopeful little treat for the queer anti-capitalist witches among us. There’s many a reason to be cynical these days, but Malerich weaves together forgotten histories of labor victories and fantastical possibilities alike with the skill and passion of an awakened proletariat. It has its faults—as all struggles for justice do—but is full of heart, full of promise, and full of girls fighting for each other and, well, for each other ... The little the novella reveals to us about the nature of magic is fascinating, as is spinning out the implications of it in an otherwise historically-familiar setting ... However, it is with the magic that I found my greatest fault with the story. I was pleased, at first, to see the novella attempt to address the horrors of slavery. One can only see cotton mentioned so many times in a story about liberation before one’s eyes begin darting to the margins of the text. However in its attempts to convey the dehumanization and cruelty of slavery, it uses language that affirms that dehumanization—not in arguing on its behalf, but in implying the enslaved people’s humanity has literally been stolen from them, and that is why they can’t fight back. At best, it is an irresponsible metaphor (one that is applied in lesser but similar terms to the mill workers—different contexts, however, require different language). At worst, it implicitly affirms negative myths and tropes about the institution ... I think the novella’s length and scope hindered it from being able to adequately address the topic, and that this work should have been done in the plot itself, especially given the failure of both labor history (and leftist economics more broadly) to address issues of race and original accumulation. I could feel the author trying (and the scenes addressing slavery are genuinely affecting) but the problem is—as it so often is—structural ... overall I did think The Factory Witches of Lowell was lovely apart from that. Its premise is fresh and fun, its characters are grounded and warm, and its tone and message offer a much-needed dose of hope and belief that change is possible. It’s an imperfect project, but not without magic.
Read Full Review >>
Positive IRENE COLTHURST,
Historical Novel Society
... a fast-paced yet character-driven book; the characters are not deeply established, but the depth of feeling between them is nicely sketched. Neither Hannah nor Judith develops very much over the course of the story. Where the novel really shines is in the portrayals of two supporting characters: the keeper of the girls’ boarding house, Mrs. Hanson, and Mr. Boott, the owners’ agent, whose descriptions and motivations are given their due with some good writing ... a light, quick afternoon read. It succeeds at that. I did wonder what a story from Mrs. Hanson’s perspective would be like, but that is not this novel. Recommended for those looking for an inspirational novel, and those wanting a peek at the life of the mill girls who powered the U.S.’s industrialization. Anyone really seeking a novel about the territory where deep platonic female friendship crosses into love should look for another book.
Read Full Review >>
See All Reviews >>
SIMILAR BOOKS
Fantasy

40
Alan Heathcock
Positive
What did you think of The Factory Witches of Lowell?
© LitHub | Privacy