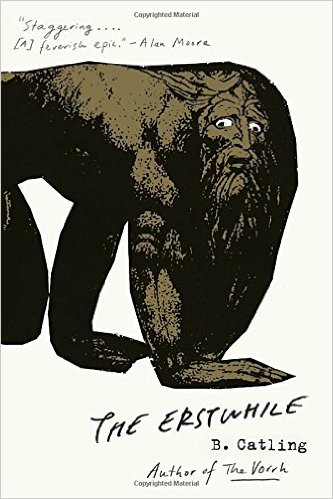 The middle volume in Catling’s alternate history/fantasy trilogy, which began with 2015's The Vorrh, focusing on a a mythical woodland in colonial Africa and the host of creatures that dwell therein.

What The Reviewers Say
Positive Jason Heller,
NPR
Where The Vorrh took place mainly in its eponymous forest as well as Essenwald — two fictional places teeming with the unreal — the sequel spends more time in the real world as we know it. It's a subtle shift, but a profound one. The Vorrh triumphed and frustrated with its dizzying, disorienting swarm of ideas and ornate language. Those elements still abound in The Erstwhile, but they're used with more moderation, as if Catling — a first-time novelist with The Vorrh — is now meticulously sculpting the clay of his epic tale after flinging it all on the floor in the first book. And for those who read The Vorrh and found it sluggish: keep reading. The pace picks up significantly in this installment ... Catling weaves alternate history and retroactive mythmaking into a stunning whole.
Read Full Review >>
Positive Stuart Kelly,
The Guardian
...it reads like Joseph Conrad trying to interpret a Max Ernst painting ... The middles of trilogies are difficult things, a balancing act between closure and continuation. The middle can’t just tread water, nor can it wholly deliver. In the right hands, this very balance can be elliptically tantalising. The Erstwhile almost revels in its status as the hiatus between Genesis and Apocalypse. It applies the sleight of hand that many of the best middle-books do, for a shift of focus ... It’s no wonder that Sinclair, Alan Moore and Michael Moorcock have enthused over these books: Catling is using the same raw materials they do, but in a different manner ... Even in the most extreme moments Catling has an eye to the wry, to the momentous absurdity of just being a thing made of flesh in a world that is not. In something as fluorescently psychedelic as this novel and its predecessor, the reader still requires an affective hook.
Read Full Review >>
Mixed Niall Alexander,
Tor
...explodes the exceptional premise of its predecessor at the same time as falling short of fulfilling its awesome promise ... ultimately, the atrophied angels after which this novel is named just aren’t as effective a focus as the Vorrh was...Unfortunately, as fascinating as the Erstwhile are in the abstract, in practice, they’re baffling ... inasmuch as this distance serves to broaden the overall scope of the series, it also places readers at a regrettable remove from the richness and resonance of the grotesque garden at its centre ... The Erstwhile is a good book, to be sure, but great it ain’t, I’m afraid. In that—and in lieu, too, of either a bona fide beginning or anything resembling an ending—it’s very much a middling middle volume.
Read Full Review >>
See All Reviews >>
SIMILAR BOOKS
Fiction

Palmares
Gayl Jones
Positive
What did you think of The Erstwhile?
© LitHub | Privacy