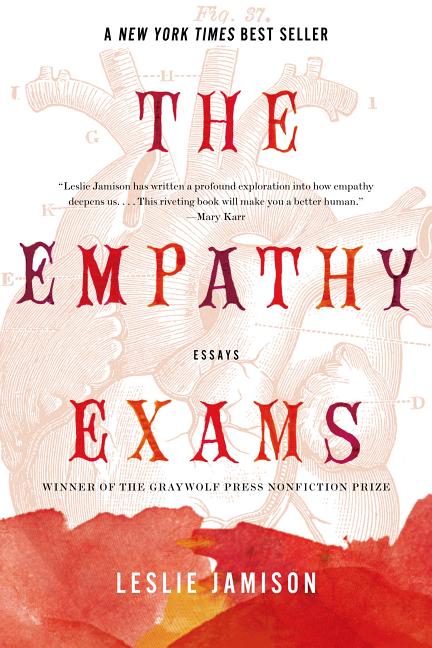 Winner of the 2011 Graywolf Press Nonfiction Prize, this debut essay collection blends memoir, journalism, and philosophical meditation to address addiction, poverty tourism, strange physical ailments, mental health, and other subjects swirling around the subject of physical and psychic pain.
Rave
Based on 13 reviews

What The Reviewers Say
Rave Dwight Garner,
The New York Times
In The Empathy Exams...[Jamison] calls to mind writers as disparate as Joan Didion and John Jeremiah Sullivan as she interrogates the palpitations of not just her own trippy heart but of all of ours ... her cerebral, witty, multichambered essays tend to swing around to one topic in particular: what we mean when we say that we feel someone else’s pain. I’m not sure I’m capable of recommending a book because it might make you a better person. But watching the philosopher in Ms. Jamison grapple with empathy is a heart-expanding exercise ... Ms. Jamison is painfully well read and well informed. She is capable of quoting James Wood, Axl Rose and the philosopher Mark Jefferson in the space of four or five sentences without sounding deranged. At the same time, one or two of her lesser essays find her swinging too frequently from quotation to quotation, as if from vine to vine. Her sentences have an ideal speed-to-power ratio ... I’ll read whatever she writes, as long as I’m around.
Read Full Review >>
Rave Olivia Laing,
The New York Times Book Review
...[an] extraordinary and exacting collection of essays ... It is to Jamison’s credit that she doesn’t choose the easy neutrality of the distanced observer, but rather voyages deeply into both extremes, maintaining almost always an admirable awareness about the perils of her approach ... This capacity for critical thinking, for a kind of cool skepticism that never gives way to the chilly blandishments of irony, is very rare ... I can’t say I much like the heavy-handed gender essentialism of her approach, or the moments of over-identification with her subjects, something her best essays rarely permit ... But it’s a danger in keeping with her larger point, which is that it’s worth risking an excess of feeling, rather than taking up the fashionable pose of world-weariness, which all too easily shades into detachment and then to cruelty ... Jamison is capable of the most extraordinary flourishes of image ... There is a glory to this kind of writing that derives as much from its ethical generosity, the palpable sense of stretch and reach, as it does from the lovely vividness of the language itself ... It’s hard to imagine a stronger, more thoughtful voice emerging this year.
Read Full Review >>
Rave Mark OConnell,
Slate
The go-to cliché for this kind of writing, or this kind of subject matter, would be 'unflinching.' That would be inaccurate in this case, because while there’s certainly a relentlessness to Jamison’s pursuit of the topic of pain, she does flinch. In fact, one of the more powerful aspects of her writing is the extent to which she is able to flinch while maintaining the steadiness of her gaze ... It’s rare, and quite thrilling, to encounter a writer who so elegantly incorporates her own writerly anxieties into her work, who is so composed and confident about the value of her own self-doubt. (In this sense, her writing often recalls the work of David Foster Wallace, one of many influences she openly engages with throughout the collection.) ... This kind of ambivalence, this doubling back on her own assumptions, is what makes Jamison such a wonderful essayist. What feels especially vital...is the intensity of her self-interrogations, the dramatization of the resistance against her own literary instincts ... Jamison’s writing is often formally inventive, but never appears to be pursuing formal invention for its own sake; it’s always a case, rather, of the material demanding some radical style of treatment, like a condition with no obvious cure.
Read Full Review >>
See All Reviews >>
What did you think of The Empathy Exams: Essays?
© LitHub | Privacy