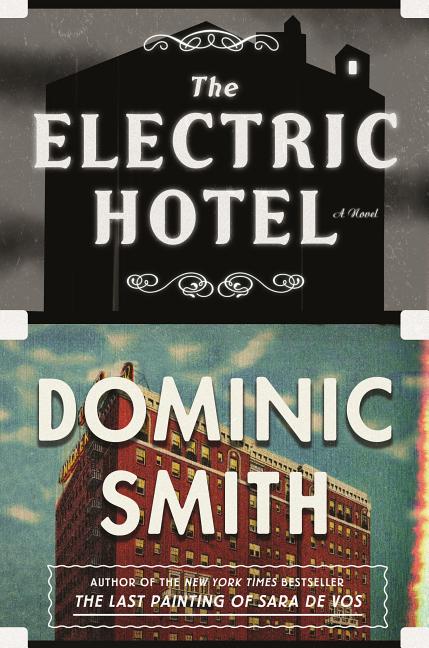 The author of The Last Painting of Sara de Vos takes readers from the nascent days of cinema in Paris and Fort Lee, New Jersey, to the battlefields of Belgium during World War I, and to the faded Knickerbocker Hotel in 1960s Hollywood, following the intertwined fates of the early cinematographer Claude Ballard and his muse, Sabine Montrose.

What The Reviewers Say
Rave Stephanie Zacharek,
The New York Times Book Review
Watching an early silent [film] can feel like peering into another person’s dream. Smith captures that spirit, and more, in The Electric Hotel, a vital and highly entertaining work about the act of creation, and about what it means to pick up and move on after you’ve lost everything ... With The Electric Hotel, Smith...puts a human face on the details of early film history. In Claude, he gives us a character who’s alive to the ways in which celluloid can capture flashes of life and depths of feeling. But Claude is also susceptible to the tragedy of love ... Claude Ballard and Sabine Montrose’s Electric Hotel lives, sadly, only within the pages of this novel ... and yet so vivid we can imagine every frame, tiger and all.
Read Full Review >>
Rave Lauren Bufferd,
BookPage
Dominic Smith’s engaging new novel, The Electric Hotel, offers a deep dive into the history of early cinema ... the joy in The Electric Hotel is in the getting there: the travels from Paris to New York at the very birth of cinema, the repeated run-ins with a litigious Thomas Edison and Ballard’s return to Europe amid the scarring battlefields of World War I. Though an extended set piece in war-ravished Belgium feels like a slight misstep, the novel quickly gets back on track as Ballard and Embry plan for a rerelease of the restored classic. Smith skillfully blends film history with the adventures of his intriguing crew, never losing sight of their individuality. The Electric Hotel enchants with a compelling plot but satisfies with the fully felt pathos of its characters.
Read Full Review >>
Positive Stephen Schmidt,
Library Journal
Smith tries to cover too much territory, but Ballard is finely rendered, and there are quite a few edge-of-your-seat moments. Recommended to fans of Graham Moore's The Last Days of Night and Amor Towles's The Gentleman from Moscow.
Read Full Review >>
See All Reviews >>
SIMILAR BOOKS
Coming Soon

A Trail of Crab Tracks
Patrice Nganang
Positive
What did you think of The Electric Hotel?
© LitHub | Privacy