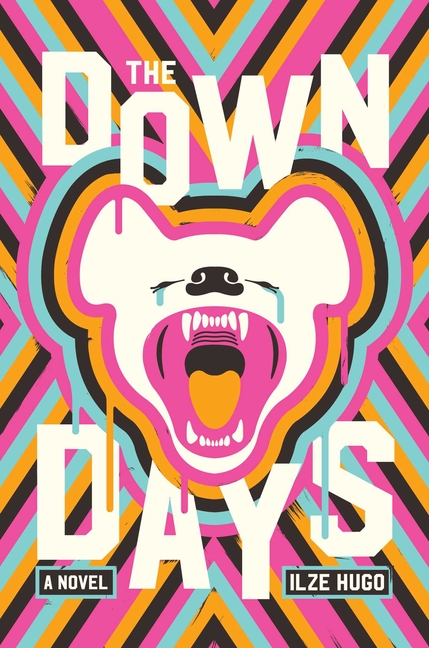 "In the aftermath of a deadly outbreak bearing similarities to the Tanganyika Laughter Epidemic, a city at the tip of Africa is losing its mind--complete with hallucinations, paranoia, and good old-fashioned ghost sightings. Is it the result of secret government experiments, an episode of mass hysteria, the effects of trauma, a sign of the end times? In a quarantined city in which the inexplicable has already occurred, rumors, superstitions, and conspiracy theories abound"--

What The Reviewers Say
Rave Mary Retta,
Tor.com
In a weird way, Ilze Hugo’s debut novel The Down Days feels almost a little too on the nose ... Hugo’s effortlessly buoyant prose and magical realist impulse shines through ... the narrative plot driving Down Days forward sets this project apart from her previous writing and illustrates an ability for powerful and nuanced storytelling not seen in her shorter pieces. One of Hugo’s greatest accomplishments in the novel is her ability to establish laughter as something worthy of fear. In The Down Days, the characters are infected with the giggles and uncontrollable laughter often drives people to death. While this plot might sound a bit ludicrous, Hugo completely pulls it off. The reader easily enters the mind of the characters as they grow paranoid, begin panicking, hallucinating, experiencing loss, and trying to make sense of their new world where joy is a sign of impending doom ... post-apocalyptic circumstances became not only fascinating, but strangely reassuring. The characters in The Down Days are potentially the most lovable component of the book. Hugo’s in-depth and punchy descriptions for each protagonist creates people so vivid, it’s easy to forget we are reading about a fictional world ... Aside from the plot itself, The Down Days shone in its lyrical, poetic language and the elements of magical realism embedded throughout the story. From the book’s first sentence, Hugo establishes herself as a master of language ... And the playful, upbeat pace of the prose throughout the novel mirrors the book’s fast paced plot and never allows the reader to bore of the narrative.
Read Full Review >>
Positive Jennifer Wilson,
The New Republic
A novel that explores the shaky foundations of public trust—and the sham remedies, conspiracy theories, and noncompliance that flourish in these conditions—The Down Days is a reminder that our current moment has been here all along ... the plot of the novel begins to go a little off the rails, and it starts to feel like two books—one about a laughing pandemic, one about spiritual possession and social panic, with not enough always connecting the two ... does not feel especially tied to questions of race or how South Africa’s unique historical traumas have manifested anew in a laughter-ridden Sick City. Likewise, with the city’s wealthy white population gone or in hiding, so, too, do the kinds of racial inequities accentuated by a pandemic feel largely missing from the novel. It is a disappointing blind spot in an otherwise eerily astute and energetic work of fiction ... It is a strange thing to have a dystopian work of science fiction suddenly read like a realist novel in the vein of Balzac, but that is what makes The Down Days such a bizarre (but wildly addictive) book. It has the telltale formal qualities of genre fiction: rapid but ethically dubious advances in medicine, dystopian limits on freedom of movement, rapid depletion of resources. But its content could hardly be called dystopian—since its publication date has rendered it familiar, mundane ... promises an opportunity to see what our response to this moment might have been like if we had never seen it coming, and yet ultimately refuses to give us that satisfaction. Any fiction that accurately captures our so-called new normal, this novel shows, will have to grapple with the old one.
Read Full Review >>
Positive Samantha Nelson,
The A.V. Club
The Down Days is one of the most accurate depictions of the strange realities of life during a pandemic. Hugo’s eerily prescient story depicts a world fundamentally transformed but still recognizable ... while so much apocalyptic fiction winds up dwelling on humanity’s worst impulses, Hugo’s novel is far more optimistic. There are no real villains here except for maybe the self-righteous and delusional who deny the plague’s power or claim to have a cure, like a group of evangelicals who believe that the disease can be prevented by cutting out processed foods. Mostly it’s a story of flawed people, each broken in some way by grief and the fundamental shift in how society functions. Even the people who do the worst things are sympathetic; they’re just trying to survive and help others through an impossible situation. Hugo’s strange version of Cape Town, rechristened Sick City, is vibrantly brought to life through her detailed descriptions. Punctuated with Afrikaans expressions, local slang, and Zulu mythology, The Down Days contains asides about South Africa’s history of colonialism, slavery, and corruption without preaching. In fact, it’s a surprisingly breezy novel with short chapters that jump between perspectives as the narrative moves with the bustle of city life, all of the action condensed over the course of just a few days.
Read Full Review >>
See All Reviews >>
SIMILAR BOOKS
Fiction

Nona the Ninth
Tamsyn Muir
Positive
What did you think of The Down Days?
© LitHub | Privacy