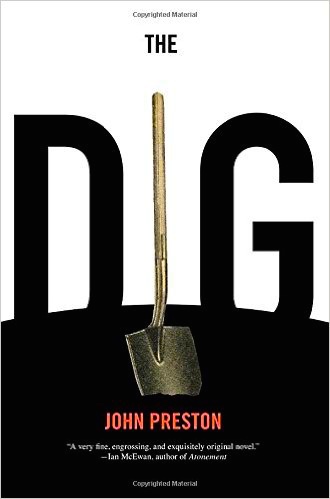 The strange story of a priceless treasure discovered in East Anglia on the eve of World War II.

What The Reviewers Say
Rave Michael Pye,
The New York Times Book Review
John Preston’s subtle novel The Dig imagines something even more remarkable: an excavation that carefully, gently exposes the searchers’ own lives and feelings to the light, just as they brush sand away from buried treasure. He has written a kind of site report that shimmers with longing and regret ... Preston loves the procedural, and it gives his story an understated energy ... Preston writes with economical grace. He shows the start of love delicately and also its failure. He is witty about the true English vice, which is pointless, pompous snobbery. He never stresses; he allows his people to live. He lets nightingales sing sadly without training them to be metaphors. He has written a kind of universal chamber piece, small in detail, beautifully made and liable to linger on in the heart and the mind. It is something utterly unfamiliar, and quite wonderful.
Read Full Review >>
Positive Sam Sacks,
The Wall Street Journal
All the elements are here for a corking adventure yarn, perhaps in the style of Howard Carter’s account of the discovery of King Tut’s tomb, which we see Mrs. Pretty reading. Yet despite the fact that most of the characters are real people, the novel’s interests are psychological rather than factual. Even as marvels are uncovered, an insistent strain of melancholy blows through these pages ... The ambient dread is partly due to the gathering storm of World War II. But the apprehension is also metaphysical, connected to the fact that the archaeologists are not digging for buried treasure so much as disturbing a grave. Mr. Preston delicately portrays the effect the specters of mortality and decay have on each narrator. As it brushes away the soil from the remarkable ship, The Dig stages understated excavations of marriage (both Basil’s and Peggy’s) and parenthood (Mrs. Pretty, who became a mother at 47, fears she won’t live to see her son grown up). Thus Mr. Preston creates an intriguing and ultimately moving concoction, a true-life chronicle that delves into secrets of the heart.
Read Full Review >>
Positive Mary Ann Gwinn,
The Seattle Times
The Dig has a feeling of hush about it, in part because the reader knows the turmoil of war that the country and these characters are about to be plunged into. There’s the restraint with which the English express themselves, even when some cutthroat museum politics are involved. And there’s the sense of awe and wonder that unfolds as the ground gives up its secrets ... This novel will be catnip for viewers of Time Team and Detectorists. Fans of stories told with economy and grace will love it, too.
Read Full Review >>
See All Reviews >>
SIMILAR BOOKS
Coming Soon

A Trail of Crab Tracks
Patrice Nganang
Positive
What did you think of The Dig?
© LitHub | Privacy