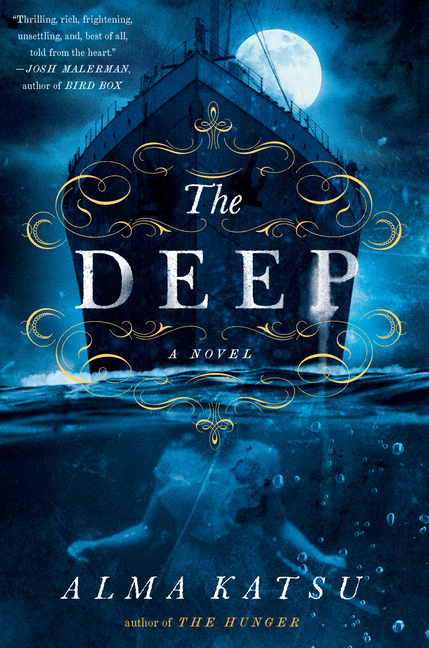 Surviving the sinking of the Titanic, Annie takes a job as a nurse on the Britannic before encountering a fellow survivor who forces her to reckon with past demons.

What The Reviewers Say
Rave Michael Thomas Barry,
New York Journal of Books
The Deep by Alma Katsu is a captivating novel that chillingly blurs the lines between mystery, horror, and historical fiction ... Set in the suffocating confines of the doomed ocean liners Titanic and Britannic, the story does an amazing job of interconnecting the plotlines of the sinking vessels. The reader is easily transported back in time in this sweeping story of love and revenge ... The Deep is an incredibly researched and compelling psychological thriller. It delivers the essential emotions that the retelling of catastrophes of this magnitude require as well as a creepy and dynamic twist that feel entirely unexpected. Katsu has easily succeeded in capturing the cold, primeval feeling of looming peril and the terrible panic that must have gripped the passengers of the two ill-fated ships.
Read Full Review >>
Positive Bob Duffy,
Washington Independent Review of Books
This chilling tale of tragic death and spectral visitations bumps along behind the restless heartbeat of its plucky young heroine. Steeped in atmospherics and relentless foreboding, The Deep treads a bleak path between two maritime disasters from the second decade of the last century ... If this premise appeals, I say go for it. Author Alma Katsu brings all the right stuff, with enough long-harbored memories, emotional wounds, violent outbursts, breathless reunions, furtive crimes, laudanum-spiked forebodings, 'gypsy' curses, and spooky seances to keep the hearts of supernatural-fiction fans thumping to all hours ... It also needs to be said, emphatically: The author is no slouch when it comes to vivid descriptions that transcend the usual formulas of the genre she’s chosen ... The climactic twist at the end of the novel, de rigueur in the horror genre, falls just a little too heavily for this reader. Still, if said flavor of this capably wrought tale befits your midnights dreary, you should find The Deep a compelling read.
Read Full Review >>
Positive Publishers Weekly
Painstakingly researched and meticulously plotted ... Though readers will be aware of the inevitable tragedies awaiting, Katsu successfully injects suspense into both time lines, spinning a darkly captivating tale of hauntings, possessions, secrets, and class through a multitude of perspectives, as readers slowly come to understand the truth of Annie’s often odd behavior. The historically predetermined ending may keep readers from connecting emotionally to the narrative, but Katsu’s artful writing and calculated pacing keep the pages turning. This is an impressive, horror-tinged trip back in time.
Read Full Review >>
See All Reviews >>
What did you think of The Deep?
© LitHub | Privacy