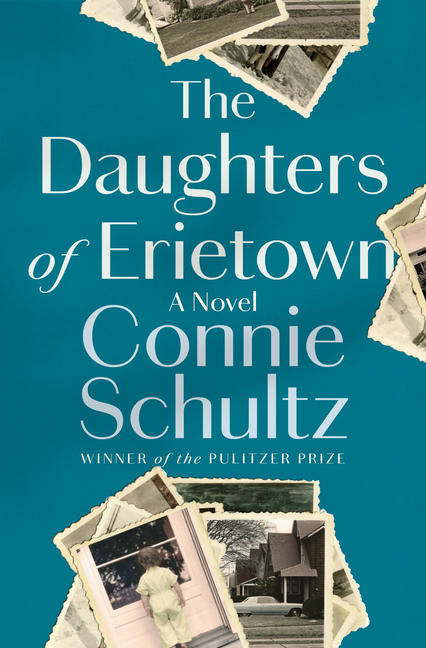 This novel tells the story of three generations in a working-class family; especially Brick and Ellie's daughter Samantha. Illuminating issues facing working-class, Rust Belt people, Erietown also chronicles the evolution of women's lives, and how much people know about each other and pretend not to, the grinding factory work of a smart man in a blue-collar job, and the secrets that explode lives.

What The Reviewers Say
Rave Amanda Beam,
The Pittsburgh Post-Gazette
... keeps a lightness to the read while delving into often difficult situations that test its heroines. Yet, by the last page, the weight of women’s burdens in past and present America has been hammered home ... Condensing a woman’s lifetime into a relatable read, Connie Schultz’s effortless writing answers this and more ... While guys often cause the turmoil, women and their choices, or lack thereof, set the pace. Ms. Schultz refuses to stereotype her female characters. Even with those whose decisions cause harm, she delves into the circumstances that influenced those acts with a nonjudgmental understanding ... tackles the so-called class divide with compassion. Too often, novels feature the extravagant trials and tribulations of the wealthy while ignoring the working men and women who live paycheck to paycheck. Not Ms. Schultz ... The child of card-carrying union man, Ms. Schultz brings authenticity to her writing about working class families. From the canned peaches as an after-dinner dessert to long, tedious hours of overtime work, the McGinity family represents a childhood many of us in the Midwest understand and one we see disappearing. The Daughters of Erietown does not seek to deify union workers, but instead tells their tale with humanism and care ... More so, the stories of the women supporting these workers are being told by someone who understands their importance. In reality, The Daughters of Erietown could be the daughters of every town. And Ms. Schultz should be proud to be called its mother.
Read Full Review >>
Positive Susan Coll,
The Washington Post
... absorbing ... At times, this closely observed family saga reads like comfort food, peppered with nostalgic references to products including Lawson’s French onion dip and Toni home perms, as well as occasional feel-good homilies, such as 'you should always be able to feel proud of the girl you see in that mirror.' But this quiet, Anne Tyler-esque novel is also a reminder that gentler times were not always gentle, that life is filled with hardship even without existential threats.
Read Full Review >>
Positive Karen Ann Cullotta,
BookPage
While Schultz’s compelling narrative and realistic characters will keep readers turning pages into the night, her eye and ear for real-life details set this novel apart from other domestic sagas. Part tragic love story, part powerful testament to shifting cultural norms and the evolution of the women’s movement, The Daughters of Erietown is an impressive first novel with a big heart.
Read Full Review >>
See All Reviews >>
SIMILAR BOOKS
Fiction

The Evening and the Morning
Ken Follett
Positive
Fiction

I Give It to You
Valerie Martin
Rave
What did you think of The Daughters of Erietown?
© LitHub | Privacy