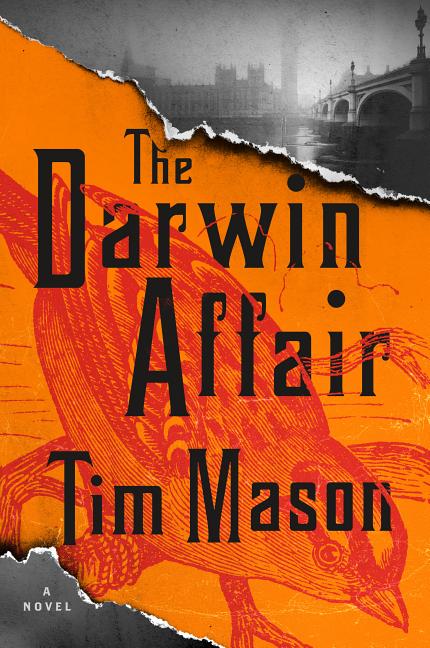 London, June 1860: When an assassination attempt is made on Queen Victoria, and a petty thief is gruesomely murdered moments later, Chief Detective Inspector Charles Field quickly surmises that these crimes are connected to an even more sinister plot. Soon, Field’s investigation exposes a shocking conspiracy in which the publication of Charles Darwin’s controversial On the Origin of Species sets off a string of murders, arson, kidnapping, and the pursuit of a madman named the Chorister. As the investigation takes Field from the dangerous alleyways of London to the hallowed halls of Oxford, Field uncovers dark secrets that were meant to remain forever hidden.

What The Reviewers Say
Positive Michael McCarthy,
Washington Independent Review of Books
In The Darwin Affair, first-time novelist Tim Mason uses the release of Darwin’s book and Queen Victoria’s court as a backdrop for what turns into a thrilling mashup of The Devil in the White City and The Hound of the Baskervilles. At its black heart, the book is a serial-murder mystery ... Decimus Cobb...is one of the most fully realized terrors committed to print this year ... Along with the novel’s nail-biting pace, there’s a welcome gravitas that grounds everything. Nuanced accents from all strata of London, circa 1860, add rich flavor. Historical backstory about characters like Karl Marx...Dickens, and Robert Fitzroy, who captained Darwin’s HMS Beagle, provide believable context. Mason clearly has a good time conjuring what could have happened in the wake of an elegant, world-altering theory. It’s effortless storytelling and makes the implausible real. Granted, this is a bloodied yarn, but, like all great detective work, the threads leading to discovery can’t be ignored.
Read Full Review >>
Positive Publishers Weekly
... an audacious historical thriller ... The intelligent plot features prominent figures of the time, including Karl Marx, who may have a link to Rendell, and Charles Darwin, whose heretical theory of evolution has unsettled some very powerful men. Wry prose and vivid period detail help make Mason’s speculations feel plausible.
Read Full Review >>
Positive Kirkus
Although this is Mason’s debut novel for adults, he’s an accomplished playwright. Those skills are evident in the crisp dialogue and well-structured scenes of this book ... The cast of characters teems with satisfyingly despicable villains, many of them based on real aristocrats and scientists. The most villainous, however, is the memorably terrifying Decimus Cobb ... With many grisly murders and many shocking surprises along the way, the book rockets toward a last dark twist. Careful research, a driving plot, wry wit, and compelling characters make this a most entertaining read.
Read Full Review >>
See All Reviews >>
SIMILAR BOOKS
Fiction

The Devil Takes You Home
Gabino Iglesias
Positive
What did you think of The Darwin Affair?
© LitHub | Privacy