The Coyotes of Carthage 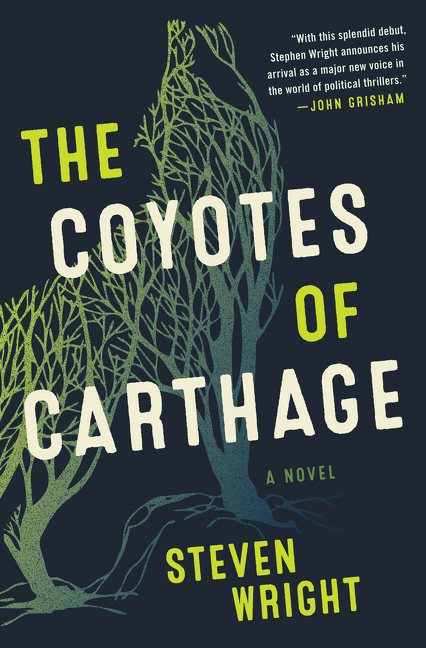 A biting exploration of American politics, set in a small South Carolina town, about a political operative running a dark money campaign for his corporate clients.

What The Reviewers Say
Rave Lawrence Rungren,
Library Journal
This is an archly comic and ultimately chilling political novel on the effects of the dark money unleashed by the Supreme Court’s Citizens United decision on the American political soul as well as on the souls of individuals. Thoughtful, sharp-edged fare for the upcoming election year.
Read Full Review >>
Positive James Grady,
The Washington Post
... ﻿reads like a 'how to' book that thousands of K Street connivers and Wall Street warriors don’t want the rest of America to see ... riveting stuff, though not at all far-fetched. Those who pick up the book get a view of how the sausage of today’s politics gets made: from grinding up the hearts and minds of ordinary American citizens ... Andre is a strong but narratively flawed character...His backstory allows Wright to shed light on important non-electoral political and social issues, but those same forces undercut his protagonist’s believability. And while some secondary characters personify other human hopes and foibles, they often feel too forced, too cliched, too narrowly used ... But when Andre’s on his fixer’s game, ah, the places Wright will take you in the politics that shape our lives, the backrooms, back alleys and bad dreams of our cash-hacked system, and he does so with a ticktock pace and knockout prose ... Ultimately, the plot of this propulsive, engaging novel is not about the corruption in South Carolina or the crisis of conscience that catches up with Andre. The plot of this novel about politics is the lives we’re living now in an America where being a heart-beating, air-breathing human is not enough to make you a fully empowered citizen.
Read Full Review >>
Positive Tod Goldberg,
USA Today
... a political thriller – in the sense that it’s thrilling to observe – which boils national politics down to the local level, in all of its banality, and all of its profound human consequence ... Wright is also an exceedingly adept satirist, and his ability to lift the curtain on the manipulation of data, criminal justice, and the sociological behavior of voters is nothing short of fascinating ... a political novel in all the best ways, which is to say it’s about public affairs: messy and complex and never easily settled.
Read Full Review >>
See All Reviews >>
SIMILAR BOOKS
Fiction

Girl A
Abigail Dean
Rave
What did you think of The Coyotes of Carthage?
© LitHub | Privacy