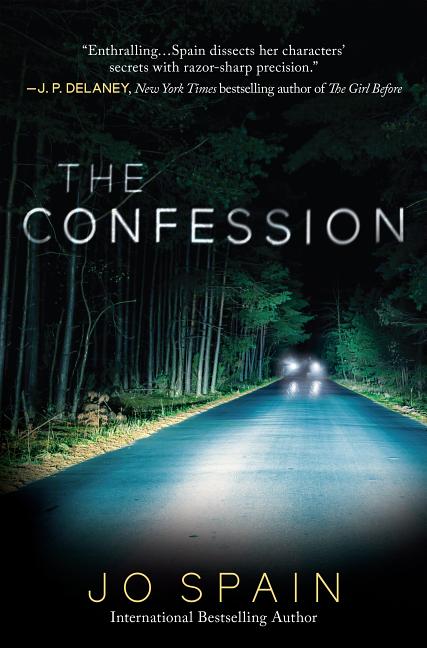 Late one night a man walks into the luxurious home of disgraced banker Harry McNamara and his wife Julie. And when the man launches an unspeakably brutal attack on Harry, a horror-struck Julie, frozen by fear, watches her husband die. But who is really the guilty one?

What The Reviewers Say
Rave Weston Ochse,
Criminal Element
...a gripping psychological thriller that makes you question whether the confession of a crime on the first page is driven by a guilty conscience or whether it’s a calculated move in a deadly game ... The Confession was anything but simple, but it was a refreshing change—a meta-narrative—as surprising and pleasant as thinking you had opened up a bottle of cold chardonnay only to find out it’s champagne ... Many elements of The Confession, especially her characters, were reminiscent of the plays of American playwright Tennessee Williams ... Jo Spain drops narrative gems that gleamed perfection ... I’m always pleased when I see such expert narrative skill on display.
Read Full Review >>
Positive Joe Hartlaub,
Bookreporter
Author Jo Spain puts an interesting spin on a number of classic mystery genre themes, updating things here and there ... The result is a story that you will want to simultaneously linger over and read quickly while you attempt to guess the motive ... a rare treat, a combination of a psychological thriller and a domestic drama with a bit of a police procedural thrown in. Spain has a wonderful ear for cop shop dialogue and puts it on full display here.
Read Full Review >>
Positive Publishers Weekly
...[a] mesmerizing thriller ... Spain’s vivisection of guilt and revenge pulls readers through to a harrowing denouement. Even seasoned genre veterans will be riveted by this modern-day morality tale.
Read Full Review >>
See All Reviews >>
SIMILAR BOOKS
Fiction

Shutter
Ramona Emerson
Positive
What did you think of The Confession?
© LitHub | Privacy