The Colossus of New York: A City in 13 Parts 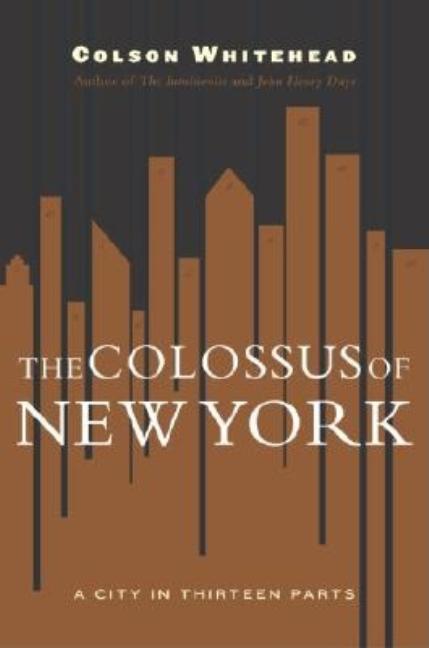 An ode to the city that never sleeps, The Colossus of New York captures the city’s inner and outer landscapes in a series of vignettes, meditations, and personal memories. Colson Whitehead conveysthe feelings and thoughts of those who have conquered its challenges, and of those who struggle against its cruelties.

What The Reviewers Say
Rave Luc Sante,
The New York Times
The book is a tour de force of voice, restlessly hopscotching from first to second to third person, from observation to speculation to reminiscence to indirect citation, in a staccato rhythm that effectively mimes the noise of the city. The identity of the narrator shifts almost sentence to sentence. Sometimes the author is speaking, and sometimes it is someone overheard in a crowd or the sound of someone else's interior monologue or some anonymous emanation from the domain of received ideas. The texture is like the flick of a radio dial across the band, if all the stations had achieved a mysterious unity of subject ... The Colossus of New York is a short book, but its density doesn't make for a quick read. Navigating a chapter is a bit like walking through six blocks of Midtown at lunchtime: everything conspires to slow you down, but you will have taken in more sensations than you could reasonably expect from such a distance anywhere else. Channeling the crowd, Whitehead avoids the taint of Fine Writing; there is a lot of wit on hand, but it sounds like the wit of the people.
Read Full Review >>
Rave Claire Looby,
The Irish Times
As if detailing the anatomy of a sentient being, Whitehead traces arrivals at the Port Authority, above and below ground, across bridges and through squares to their inevitable departures. The cadence throughout is hypnotic and the sensation of seeing into and through the lives that eddy around each other in the city that never sleeps is electric. This is not a guidebook to a city; it’s a treatise on never-ending human love and endeavour.
Read Full Review >>
Positive John Freeman,
The Pittsburgh-Post Gazette
The tone throughout is cozy and colloquial, with flourishes of whisper-in-your-ear lyricism ... The New York of Whitehead's imagination is an occult world made up of tall tales and legends, of hand-to-mouth wisdom. It's hard to call this kind of writing prose; it would be stretching to label it poetry. Composed against the city's back-beat, grooved by the melody of its voices, Whitehead's style is best described as Duke Ellington crossed with Run DMC, with the occasional sampling of Frank Sinatra. From sentence to sentence, a-ha moments are many. It's as if Whitehead scooped his pen into the collective unconscious of everyone who's ever visited New York -- and borrowed some overheard stories, too -- and came up with a voice that's everyone and no one ... He has tapped into some primal part of the brain where New York lives. He will lead people out onto the city's steel and concrete dance-floor, whether they want to be there or not. Not half bad at all, indeed.
Read Full Review >>
See All Reviews >>
What did you think of The Colossus of New York: A City in 13 Parts?
© LitHub | Privacy