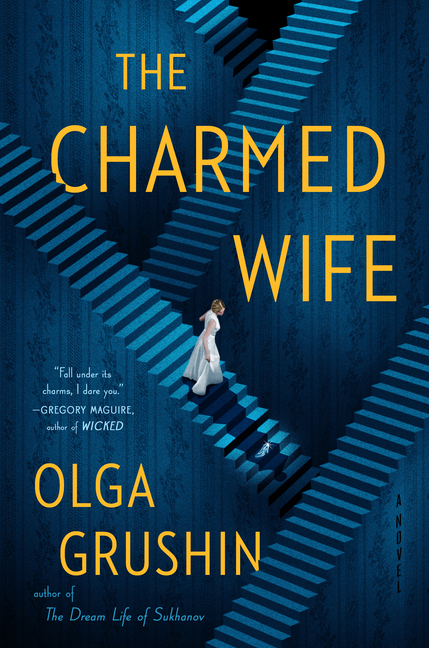 Cinderella married the man of her dreams, yet now, two children and 13-1/2 years later, things have gone badly wrong. One night she sneaks out of the palace to get help from the Witch who, for a price, offers love potions to disgruntled housewives.

What The Reviewers Say
Rave Rebecca Munro,
Bookreporter
Grushin skillfully unpacks every aspect of fairy tales, such as the unbelievability of insta-love, the bindings of the rules of magic, and even the ways that evil witches may have been trying to help all along. As Grushin makes clear, the same fairy tale laws that make magic possible also bind their characters and limit their worldviews ... The idea of a fractured fairy tale is instantly compelling in its subversiveness...But what Grushin does by focusing on an adult Cinderella takes the fractured fairy tale to the next level, not only challenging the stories we have been spoon-fed since we were children, but also drawing painfully relatable real-life parallels on topics like weight and beauty, aging and, of course, the dissolution of a once-happy relationship ... Though the toils of the fantasy world can occasionally be hard to follow, Grushin makes a valiant effort to include nods to other fairy tales, push the limits of the demanding, exacting magic system, and throw in a bit of whimsy as she goes ... Sophisticated, inventive and endlessly witty, The Charmed Wife is a fresh and wildly original take on fairy tales, marriage and one woman’s search for happiness.
Read Full Review >>
Positive Susan Petrone,
The New York Journal of Books
In Grushin’s modernist fairy tale land, your local witch can function as both apothecary and hit man. That contemporary sensibility seeps through everything—the characters, the jokes (there are some), the plot twists, the language. It would be very easy for a lesser writer to make this solely a feminist retelling of a familiar tale or a Hallmark-ish How Cinderella Got Her Groove Back story of empowerment. While The Charmed Wife encompasses those tropes, it is not defined by being only one type of story. Timelines and chronologies and people and places seamlessly shift and morph and nothing is as it seems. That all of this works and ties together is due to Grushin’s facility with language, which is, in many ways, a marvel. It’s the kind of prose that demands you submerge yourself ... gorgeous writing ... However, as with many writers, Grushin’s greatest strength may also be her greatest weakness. The lushness and occasional density of Grushin’s prose is like a super-rich triple-chocolate cake—you can only digest so much of it at once. Sometimes those lush descriptions are too much ... A reader can get lost in such prose. Conversely, such prose can also lose a reader. The best fiction takes us out of our lives and into someone else’s. There are moments when Grushin’s dense walls of swirling text are an impediment to connecting with her protagonist, making the book’s denouement a little less emotionally satisfying than it could have been ... not the kind of book to read in the laundromat or while waiting at the dentist’s office. It’s best read late at night or maybe before bed, when the real and the imagined naturally (or unnaturally) meld together, where you can sink, undisturbed, into the language.
Read Full Review >>
Rave Andrienne Cruz,
Booklist
... a reconceived and extended fairy tale that will delight domestic-fiction readers with its depiction of Cinderella ... Grushin achieves a fairy-talk style ... The mystery of how a woman who has everything would resort to drastic measures is at the core of the book and pivots the fairy tale back to its moral roots. An element of suspense is worked into a tapestry of new and modern backstories, while nostalgic story lines add a bit of fun; there is even a side story about Cinderella’s mice that deserves its own separate book. Surprising revelations and some snark provide the finishing touch in this richly imagined, genre-bending retelling of, at its heart, a tale-as-old-as-time.
Read Full Review >>
See All Reviews >>
SIMILAR BOOKS
Fiction

Margreete's Harbor
Eleanor Morse
Positive
What did you think of The Charmed Wife?
© LitHub | Privacy