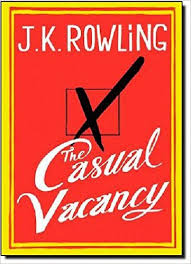 Set in the fictional English village of Pagford, The Casual Vacancy narrates the frenzy of scheming and trail of disturbing events following the death of Barry Fairbrother, a member of the Pagford Parish Council.

What The Reviewers Say
Positive Monica Hesse,
The Washington Post
...the very existence of The Casual Vacancy represents a truckload of moxie...At another level, this book represents a truckload of shrewdness. In her first grown-up novel, Rowling has chosen to construct her plot around a local municipal election... One man suffers an untimely death, the gossip mill churns... The storylines interweave as characters interfere with one another’s business. Nearly every character gets a narrative point of view ...Rowling re-traverses the Potter series’ entire tonal journey: a gradual darkening in which snide comments on small stakes give way to sharp commentary on big ones ... A lazy critic might coyly query whether The Casual Vacancy contains enough magic ... This book would be a little better if everyone were carrying wands.
Read Full Review >>
Positive Lev Grossman,
TIME
...The Casual Vacancy is a different beast entirely... a big, ambitious, brilliant, profane, funny, very upsetting and magnificently eloquent novel of contemporary England, rich with literary intelligence and entirely bereft of bullshit... Her interest is in the emotional and social chasms that yawn between us and the grotesque emotional wounds we inflict on those on the other side, always in the belief that we’re acting in righteous self-defense ... Rowling, by contrast, shows off a new descriptive dexterity, an extra verbal gear that until now she kept in reserve... In Pagford, everybody believes they’re the hero of the story, but as the novel’s point of view restlessly shifts, we see each character recast again and again as villain, victim, fool, lover, ally, traitor ... The Casual Vacancy is, in a funny way, not so much an extension of the Harry Potter books as their negative image: it’s a painfully arbitrary and fallen world, a world that, bereft as it is of the magic that animates and ennobles Hogwarts, sags and cracks under its own weight.
Read Full Review >>
Mixed Carmela Ciuraru,
The San Francisco Chronicle
If, however, you like your fiction plot-driven, dark, with a surfeit of melodrama, this novel is for you ...The Casual Vacancy is no masterpiece, but it is a good escape ... This novel is an epic soap opera: It's stuffed with revenge, sex, duplicity, violence, malignant gossip, drug addiction, self-mutilation, snobbery, cruelty, poverty and death ...a married, middle-aged father of four, Barry Fairbrother, drops dead of an aneurysm in a golf club parking lot. His death sets off a frenzy of scheming and leads to some rather disturbing events as well ... Meanwhile, as many of the adults in Pagford engage in increasingly repellent behavior, the adolescents are mired in dramas of their own ... As Rowling's narrative shifts among various families and characters, she exposes the misery that exists behind their finely painted front doors ... Some readers may feel put off by a story that is so relentlessly bleak, and one that offers such vicious character portraits ... Had The Casual Vacancy not built to a shrill, melodramatic climax, it would have been a more powerful work of fiction.
Read Full Review >>
See All Reviews >>
SIMILAR BOOKS
Fiction

Mount Chicago
Adam Levin
Mixed
What did you think of The Casual Vacancy?
© LitHub | Privacy