The Captain and the Glory: An Entertainment 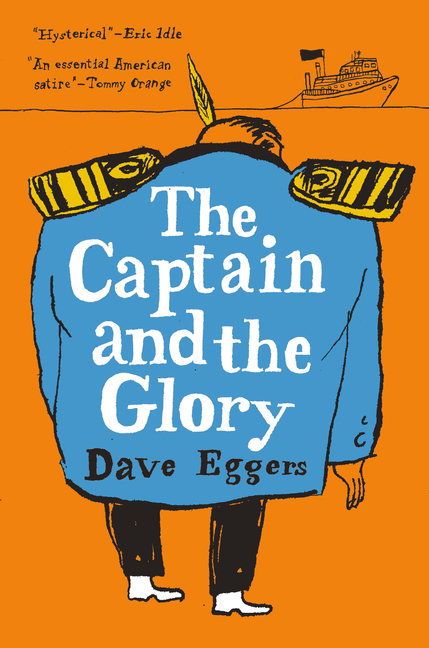 A satire of the United States in the throes of insanity, this novel tells the story of a noble ship, the Glory, and the loud, clownish, and foul Captain who steers it to the brink of disaster.

What The Reviewers Say
Positive Johanna Thomas-Corr,
The Times (UK)
Dave Eggers’s solution is to fight funny with funny. If the commander-in-chief is a product of the entertainment industry, let’s bring him down entertainingly, he seems to be saying ... a hugely enjoyable parable ... You could call it a satire but this 114-page novella reads more like a nautically themed summary of the past three years ... the writing works because Eggers doesn’t try to be too sly or cerebral. The tone is cartoonish and naive and the illustrations by Nathaniel Russell are childlike, but sinister, reminiscent of a Hilaire Belloc story ... risks coming over as smug and condescending ... Eggers shows better comic timing than McEwan, and greater moral clarity too ... He knows you can’t just lampoon the culprit, you need to hold up a mirror to the whole society. His real target is moral hypocrisy. Many of the captain’s supporters see what a despicable human he is. But he serves their interests. And Eggers doesn’t miss a chance to take a dig at the Democrats either ... Eggers doesn’t have to exaggerate, he just has to pick and choose his details. The Captain and the Glory is funny because it’s true.
Read Full Review >>
Positive Donna Seaman,
Booklist
With hilariously identifiable characters, chillingly brazen criminality, and burgeoning totalitarianism conveyed in a mesmerizing, fairy-tale cadence, Eggers, in concert with nimble and expressive illustrator Russell, presents an ingenious, incisive, grimly entrancing fable reflecting our nation’s ever more alarming predicament.
Read Full Review >>
Mixed Sandra Newman,
The Guardian (UK)
The Trump presidency has been exhaustively assailed by satirists, and it’s not Eggers’s fault if this parable feels overfamiliar. That he nonetheless makes his story engaging, disturbing and sometimes genuinely funny is a testament to his skill as a writer. This, combined with the pleasure many take in seeing Trump lampooned, will make the book a reliable stocking-filler in left-leaning homes ... That said, it’s mostly composed of the easiest jokes available: Trump as ignoramus, Trump as fat man, Trump as man-baby, Trump wanting to sleep with his daughter, Trump turning into a breathless teenage girl at the approach of the manly Putin ... It is possible this is meant to subtly mock people who believe impeaching Trump is all that’s needed to Make America Great Again, but the few who still harbour this belief will finish the book reassured that Eggers agrees. The broad comedy also becomes jarring as the mass murders of foreigners and dissidents escalate, culminating in a dinner thrown by a Kim Jong-un figure that features a hollowed-out corpse turned into a trough for guacamole. The cartoon gore feels dehumanising when the authoritarians being satirised have real victims ... In general, it is successful as a gift book, whose better jokes can be read aloud to approving chuckles after Christmas dinner. As a significant satire of the political crisis in America, it falls woefully short.
Read Full Review >>
See All Reviews >>
SIMILAR BOOKS
Coming Soon

Before She Disappeared
Lisa Gardner
Rave
What did you think of The Captain and the Glory: An Entertainment?
© LitHub | Privacy