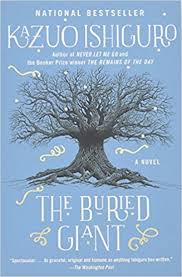 In his tenth novel, Nobel Prize and Man Booker Prize–winner Kazoo Ishiguro wrote a lyrical, allusive (and elusive) voyage into the mists of British folklore.

What The Reviewers Say
Mixed Mark O'Connell,
Slate
That is to say that The Buried Giant is is a fantasy novel in much the same sort of way that Never Let Me Go was a sci-fi yarn... Ishiguro is in full genre-occupying mode here, settling an imaginative region, capturing its tropes and conditions, and establishing within it his own peculiar sovereignty ... The story he tells here is set in a mythical early-Medieval England, in the years after the death of King Arthur ...are addressed, with an intriguing combination of distance and familiarity, by an omniscient narrator...clothes itself in the armor of chivalric romance and fantasy, it is also subtly using these formal structures to subvert from within the kinds of national mythologies that are so often built around them ... But it builds, in its final third, toward what might be described as a devastating anti-climax—the sort of conclusion you don’t realize you’ve been expecting all along until you’ve encountered it.
Read Full Review >>
Rave Neil Gaiman,
The New York Times Book Review
In The Buried Giant, his seventh and latest, he begins with clear, unhurried, unfussy language to describe the England of some 1,500 years ago, in a novel as well crafted as it is odd ...is a melancholy book, and the mist that breathes through it is a melancholic mist. The narrative tone is dreamlike and measured. There are adventures, sword fights, betrayals, armies, cunning stratagems and monsters killed, but these things are told distantly, without the book’s pulse ever beating faster ... At the heart of the novel is a philosophical conundrum, expressed first by an old woman whose husband has gone on before her, crossing the bar, as it were, to a mystical island to which she has not been allowed ... Still, The Buried Giant does what important books do: It remains in the mind long after it has been read, refusing to leave, forcing one to turn it over and over.
Read Full Review >>
Positive Marie Arana,
The Washington Post
...so we come to The Buried Giant, a spectacular, rousing departure from anything Ishiguro has ever written, and yet a classic Ishiguro story. Set in the misty bogs and moors of England in A.D. 450, not long after the death of King Arthur, the novel is a daring venture into a medieval wilderness of monsters, pixies, dragons, wizards, aging knights and sword-swinging, sanguinary warriors ... has the clear ring of legend, as graceful, original and humane as anything Ishiguro has written. By the end of it, we are made to see that a dark grain can enter our collective bloodstream and poison it with a baffling hate ...Ishiguro seems to say, some things are best forgotten: Betrayals in a long-suffering marriage can be as devastating as the human impulse to war.
Read Full Review >>
See All Reviews >>
What did you think of The Buried Giant?
© LitHub | Privacy