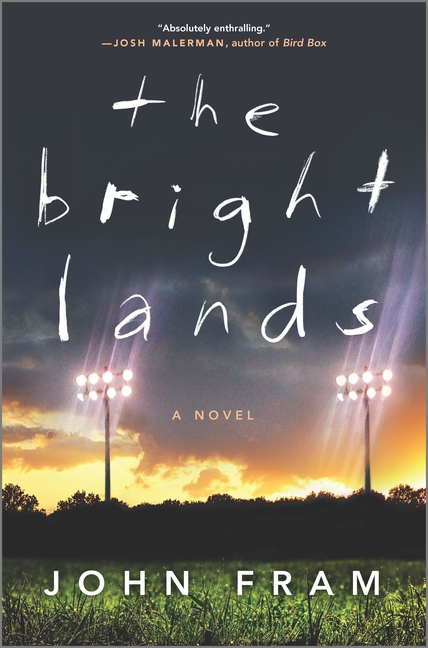 The town of Bentley holds two things dear: its football, and its secrets. But when star quarterback Dylan Whitley goes missing, an unremitting fear grips this remote corner of Texas. Joel Whitley was shamed out of conservative Bentley ten years ago, and while he's finally made a life for himself as a gay man in New York, his younger brother's disappearance soon brings him back to a place he thought he'd escaped for good.

What The Reviewers Say
Positive G. Robert Frazier,
BookPage
There’s a darkness lurking in The Bright Lands, and it’s apt to give you a case of the shivers. John Fram’s debut novel is Friday Night Lights meets Supernatural, but it’s an enticing read any way you slice it ... Fram, who was raised in Texas before moving to New York, effortlessly captures the reader’s attention with his fleshed-out characters and all the dark secrets you could want in this gripping debut.
Read Full Review >>
Mixed Stuart Shiffman,
Boookreporter
It is a taut and suspenseful thriller with a fast-moving plot and well-portrayed characters, but it has a major shortcoming—it is 'football stupid...a term sometimes used to describe books, movies or plays that employ the sport as a foundation but do so in a fashion that departs from realistically portraying the game ... If you are interested in reading a football-themed work of fiction, I would look elsewhere ... Fram paints a portrait that has countless characters. Using brief chapters with flashbacks and orderly dialogue, he keeps that large cast well organized. The conclusion of The Bright Lands is violent and somewhat disturbing. As the book speeds toward its horrific climax, readers will have much to consider in this Gothic-themed story set deep in the heart of Texas.
Read Full Review >>
Positive Publishers Weekly
Fram’s ambitious debut takes a critical, terrifying look at a small town in Texas, where high school football reigns supreme and puts a double bind on those who are desperate to get out ... While Fram stacks the deck with a few too many secondary characters (old loves, family ties) and subplots (drugs, murders, nefarious schemers), his attempt to connect Bentley’s long-buried secrets with generation-repeating bullying and homophobia is commendable. This offers as many weekend frights as celebratory lights.
Read Full Review >>
See All Reviews >>
SIMILAR BOOKS
Fiction

A Will to Kill
Rv Raman
Positive
What did you think of The Bright Lands?
© LitHub | Privacy