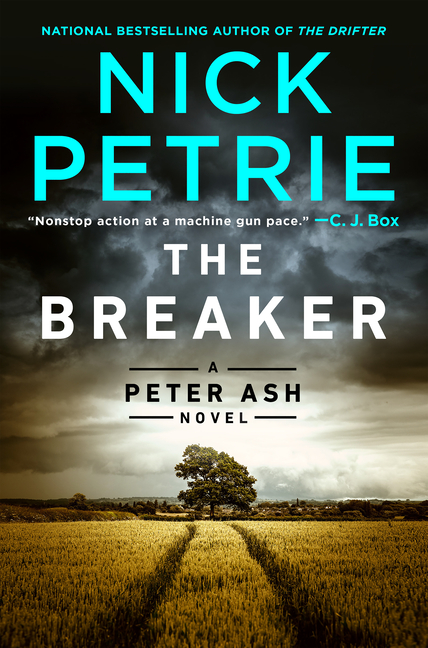 What The Reviewers Say
Rave Angie Barry,
Criminal Element
It’s so dang refreshing to see a hero like Peter in an action-packed setting. He’s plenty manly and capable when the bones start to break, but he’s not the usual testosterone-soaked, wisecracking, muscle-bound lead. And it’s also great to see an ex-military hero struggle realistically with PTSD ... It’s that degree of realism grounding the action that makes the Peter Ash series both believable and so enjoyable. Yes, there are always extremely high stakes and often layers of conspiracy at work. The Breaker is no different, with Peter and Co. racing against a ticking clock to stop dangerous blueprints from spilling onto the internet and a power-hungry millionaire who’s building a metallic army. But with Peter as our lynchpin, Nick Petrie keeps everything tethered to reality ... Petrie’s solid prose does a lot of heavy lifting, too. He’s a master of unfolding larger-than-life dilemmas in a straightforward fashion, laying out catastrophic possibilities in a truly chilling way and ratcheting the tension up to eleven every time a baddie makes a move. Peter’s capability as a hero is only matched by Petrie’s capability as a writer. Six books in, Petrie has yet to disappoint even a little. His plots, his action scenes, and his characters are always deeply satisfying. You can pick up any one of his novels assured that you’re in for a solid, exciting ride.
Read Full Review >>
Rave Beth Kanell,
The New York Journal of Books
... fine-tuning military and cyber-savvy suspense with a dose of advanced technology, all blended with compelling character development. The Breaker is a page-turner where courage, instinct, and initiative are constant necessities, and failure means the ultimate sacrifice ... The pace in The Breaker is relentless, the action dependent on both weapons and truck chases, and the descriptions beg for a film version ... the battle of friends versus power-hungry creeps takes on new dimensions, and Nick Petrie keeps it all moving, with all the balls in the air, so there isn’t really time for disbelief—just for the next weapon and defensive maneuver, with an edge of self-sacrifice ... Petrie slaps out a highly satisfying finale, and there’s only one thing to do after finishing The Breaker: Check the titles of the earlier five in this action series and start stacking them up for a binge read.
Read Full Review >>
Positive Joe Hartlaub,
Bookreporter
While this latest entry has a couple of weaknesses, it also contains some of Petrie’s best plotting, characterization and writing to date. It is more than worth your while if you are seeking some unusual edge-of-the-seat thrills ... a series of textbook examples of good old-fashioned detective work, 21st-century-style, coupled with terrific pursuit and engagement vignettes that get better and better as one proceeds through the book ... The book's initial scene seemed to go on for a bit too long and almost lost me. But by the time I was a third of the way through the story, I couldn’t stop reading. My other issue is that Peter, ironically enough, was the least interesting of the three protagonists. He seemed to be along for the ride with Lewis rather than the other way around ... However, these problems were more than counterbalanced by the manner in which Petrie morphed a chance encounter in a public market into an extremely convincing save-the-world scenario set primarily in Milwaukee with a very important side trip to Chicago. That absolutely worked for me.
Read Full Review >>
See All Reviews >>
SIMILAR BOOKS
Fiction

Find You First
Linwood Barclay
Positive
What did you think of The Breaker?
© LitHub | Privacy