The Book of Salt 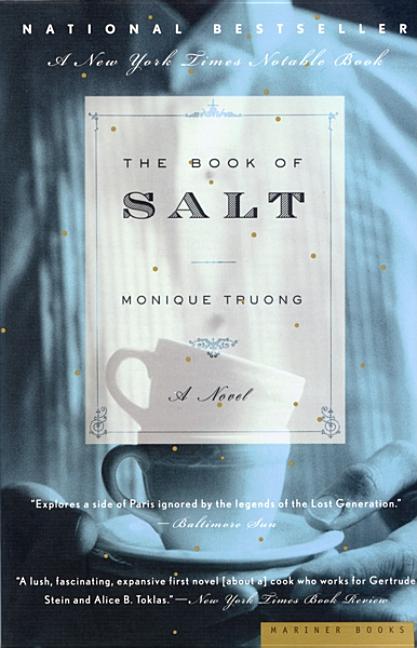 An original take on Paris in the 1930s through the eyes of Binh, the Vietnamese cook employed by Gertrude Stein and Alice B. Toklas, who views his famous mesdames and their entourage from the kitchen of their rue de Fleurus home, observing their domestic entanglements while seeking his own place in the world.

What The Reviewers Say
Rave Christopher Benfey,
The New York Times
Truong has wisely resisted two temptations: to write the book in rose-is-a-rose Steinese and to round up the usual Stein entourage of Hemingway, Picasso and company ... The book is about exile: both Binh's aching distance from his native Saigon and his two Mesdames' cheerful distance from America ... Binh's Saigon -- Monique Truong's birthplace and childhood home -- is evoked here with piercing yearning and authenticity ... Nothing in this distinctive novel feels secondhand. Binh is the key that has unlocked something in Truong, less researched than retrieved ... Plot here is minimal and elusive. The gradual unfolding of secrets -- of sexuality, race and family origin -- is more insistent than any particular conflict ... Against the odds, she has made unsettling art from precisely such exotic cuttings and transplantings.
Read Full Review >>
Positive ich Minh Nguyen,
The Chicago Tribune
The Book of Salt travels between past and present, Vietnam and France, and we soon discover that the stories Binh tells are subject to his revisions. Truong is playing with narrative confusion, but she wisely circles back to Binh's sharp, beautifully rendered observations of the mesdames and their household at 27 rue de Fleurus ... As Truong's narration jumps around in time, so most of the characters float between worlds and identities, shrouded in secrets ... Truong is taking on a lot here, with ideas of exile, storytelling and truth all filtered through metaphors of food ... There are a few moments when she lapses into an overly stylized prose, perhaps inevitable given the amount of self-conscious questioning of truth and unreliable narration. Still, the writing is lyrical and powerful, most notably the sections on Binh's mother.
Read Full Review >>
Rave CARMELA CIURARU,
The Los Angeles Times
Binh tells his story in elliptical, elusive flashbacks, revealing himself to be both endearingly naive and savvy enough to cover his tracks when necessary ... As Binh’s disorienting story wavers from present to past, his voice shifts from wry observer to that of a lost and desperate soul ... The Book of Salt offers a servant’s perspective on an uneasy relationship with artists ... Yet Truong’s novel is infinitely more expansive and multilayered. Binh is deeply troubled (clearly more so as the novel goes on), yet he is oddly noble, determined to find a life of dignity for himself. That the account of his life story ultimately proves unreliable makes Binh no less memorable or compelling a figure. And it makes Truong’s debut seem more impressive and ambitious than most contemporary first works of fiction, which often read like thinly fictionalized memoirs.
Read Full Review >>
See All Reviews >>
SIMILAR BOOKS
Coming Soon

A Trail of Crab Tracks
Patrice Nganang
Positive
What did you think of The Book of Salt?
© LitHub | Privacy