A multigenerational story about two families bound together by the tides of history and the bittersweet complexity of love.

What The Reviewers Say
Rave Alex Preston,
The Spectator (UK)
... extraordinary ... uses the stories of two men and their families to delve revealingly into complex questions of class, fate and history ... I’ve sometimes felt that Evers was an American author trapped in the body of a man from Cheshire, and this book has the scope of a Great American Novel, as encompassing and ecumenical as anything by Bellow or Franzen. But the real touchstone is Don DeLillo, and The Blind Light sent me straight back to White Noise, with which it is in direct and powerful dialogue. That Evers’s novel does not suffer by comparison is high praise indeed.
Read Full Review >>
Rave Daniel Clarke,
The Times Literary Supplement (UK)
... capacious ... It may seem odd, then, given the strength of Drum’s fears, along with the atmospheric backdrop of British Cold War history and the powerfully imagined Doom Town, to question whether The Blind Light is really a book about the shadow of the bomb. But Evers’s characters have always been prone to frightening visions, and this multigenerational story about families and friendship, set against real events spanning more than half a century, actually draws its strength from elsewhere: from the author’s ability, evident throughout his oeuvre, to portray a more everyday kind of terror ... His skill in The Blind Light, as in his earlier work, is to see the skull beneath the skin of tough, regular, often lonely lives: of people 'who get by', as he once put it in an interview. And to write their inner lives with an intimacy and spartan tenderness that in the contemporary British novel feel rare.
Read Full Review >>
Positive Clare Clark,
The Guardian (UK)
A 544-page doorstopper, The Blind Light has been trumpeted by Evers’s publishers as a state-of-the-nation novel. Its range is certainly ambitious, a 60-year span from the Cuban missile crisis to 9/11 and the present-day war on terror, but rather than an overarching sweep, the author has distilled his narrative into a series of distinct vignettes years apart, each one set over a few days. His focus is close, even deliberately claustrophobic ... Evers is excellent on the fine grain of friendship. He carefully unpicks the complex and often uncomfortable relationship between Drum and Carter ... The book is full of these delicately judged moments, simultaneously inconsequential and profound. Whereas the relationships between the men’s children feel more generic, Evers finds affecting depth in the more cautious, but in the end much truer, attachment between their wives ... He is less certain of his ground when it comes to plot. The different sections of the novel have an immersive granularity that allows them to unfold almost in real time but the structure by which he connects them across six decades is clumsy and, on occasion, melodramatic. While The Blind Light is meticulously embedded in historical detail, the (invented) seismic event that forms the fulcrum of the narrative stretches credulity, undermining the authenticity of the undertaking ... Evers’s periodically overworked prose is also a distraction. He can and frequently does write with a lovely lucidity, even lyricism, but too often he adopts an irritatingly mannered style. He has a habit of chopping his sentences. Into snatches. Snatches repeated for emphasis. Yes, emphasis. The intention is presumably to create emotional immediacy but over 500 pages it grates, disrupting rather than intensifying the reader’s connection with his characters ... There is still much to savour in The Blind Light. At its heart, the novel is a thoughtful and powerful study of the corrosive effects of fear, the damage we do to ourselves and our loved ones when danger is all we can see. Right now that story feels disconcertingly timely.
Read Full Review >>
See All Reviews >>
SIMILAR BOOKS
Fiction 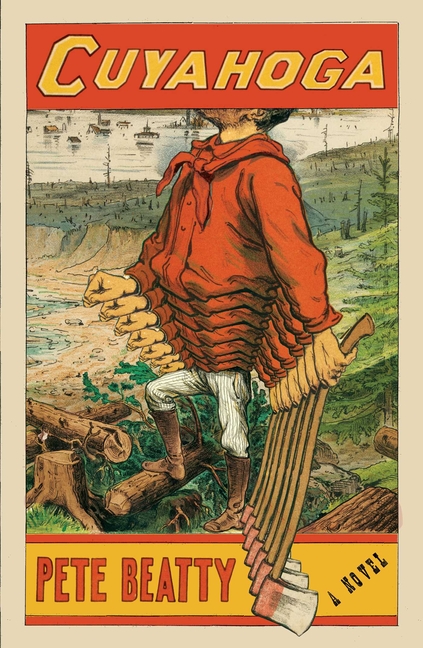 Cuyahoga
Pete Beatty
Rave
What did you think of The Blind Light?
© LitHub | Privacy