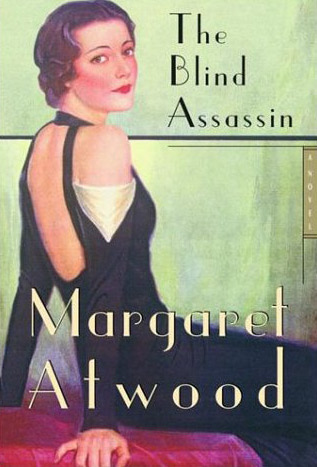 Winner of the Booker Prize

Strands of gothic suspense, romance, and science fiction are woven together into a layered narrative that gradually illuminates the secrets that have long haunted the Chase family.

What The Reviewers Say
Rave Karen Houppert,
Salon
Far from preaching to the converted, Atwood’s cunning tale assumes a like-minded reader only so that she can argue, quite persuasively, from the other side … This family saga is sketched with Atwood’s trademark dark humor and deft hand … Complementing the historical plotline of Iris and Laura’s coming-of-age between the world wars, Atwood braids in two other strands that keep her tale moving at a brisk clip…The Blind Assassin takes Atwood fans to all their favorite places — and ups the ante. This is a dark masterpiece in which tension comes from the sharp juxtaposition of worlds and in which futuristic fantasy interrupts and reflects a disquieting reality.
Read Full Review >>
Mixed John Updike,
The New Yorker
Atwood...is a dab hand at science fiction. Here, Zycron is out of this world’s time but echoes, as the often interrupted narrator explains, ancient earthly history … History, embodying ‘the ill will of the universe,’ is the ultimate blind assassin, a vast repository of cruelties and annihilations … Atwood’s maze should be allowed its turns and surprises, which unfold cunningly, and at (too much?) leisure. The attentive reader may guess some secrets before they are revealed; others are never revealed completely, as is the way with reality. A nagging sense of gimmickry, amid all these spinning wheels of plot, accompanies our awed and often delighted awareness of Atwood’s mastery of period detail.
Read Full Review >>
Pan Thomas Mallon,
The New York Times
Atwood's new novel, for all its multilayered story-within-a-story-within-a-story construction, must be judged flat as a pancake. In The Blind Assassin, overlong and badly written, our first impressions of the dramatis personae prove not so much lasting as total … The Chase girls' childhood – tutors, kitchen conversation, factory picnics – is played out at great length, and while social information should be more highly prized than it is in the modern literary novel, Atwood sometimes operates with the indiscriminate retrieval of an Internet search engine set to ‘display all’ … The less said about Planet Zycron the better; Atwood, alas, says plenty. She lengthily taxonomizes the city of Sakiel-Norn and its class-stratified inhabitants...but she proves unable to relieve the reader's tedium with the place's kinkier features, like children who weave carpets until they are blind and then go on to become throat-cutting hired killers.
Read Full Review >>
See All Reviews >>
What did you think of The Blind Assassin?
© LitHub | Privacy