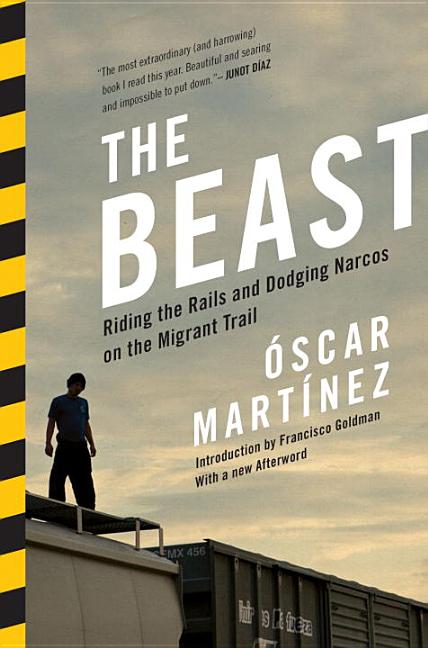 One day a few years ago, 300 migrants were kidnapped between the remote desert towns of Altar, Mexico, and Sasabe, Arizona. A local priest got 120 released, many with broken ankles and other marks of abuse, but the rest vanished. Óscar Martínez, a young writer from El Salvador, was in Altar soon after the abduction, and his account of the migrant disappearances is only one of the harrowing stories he garnered from two years spent traveling up and down the migrant trail from Central America and across the US border.

What The Reviewers Say
Rave Larry Rohter,
The New York Times
Mr. Martínez never wavers in his focus on the Salvadorans, Hondurans, Guatemalans and Nicaraguans who travel 'without anyone but robbers and kidnappers even glancing in their direction' ... In the original, Central American peasant Spanish collided with Mexican narco-gangster argot, underlining the difference between the migrants and those who exploit them. It would be nearly impossible to render these distinctive forms of speech without the slang sounding forced and artificial. But Mr. Martínez’s voice, that of an attentive observer who has seen everything but still has the capacity to feel indignation and sympathy, comes through intact ... The graceful, incisive writing lifts The Beast from being merely an impressive feat of reportage into the realm of literature. Mr. Martínez has produced something that is an honorable successor to enduring works like George Orwell’s The Road to Wigan Pier or Jacob Riis’s How the Other Half Lives ... By capturing that grim reality, and in such gripping prose and detail, Mr. Martínez has both distinguished himself and done us all a vital public service.
Read Full Review >>
Rave Ed Vulliamy,
The Guardian (UK)
...a gale-force book, a sweep across the equally daunting criminal and physical landscapes from the vantage point of those at the war's coalface ... But no one has yet traced the survivors of such massacres; no one has travelled with them into Mexico from the barrios of El Salvador, jumping trains collectively known as 'the Beast', at times flagged down or ambushed by the most vicious cartel, Los Zetas ... Martínez did these things, to learn the risks and rules first hand ... Martínez is clearly a wonderful listener – journalism's rarest and most important attribute – and this makes his prose resound with raw authenticity ... As important as Martínez's testimony is his devictimisation of these people.
Read Full Review >>
Rave Enjoli Liston,
The Independent (UK)
Martinez – who faces untold dangers as a reporter – gets beyond these numbers with skill and subtlety. He tells the stories of individuals with names, ages, faces, families, for whom migration is a matter of life and death ... Tales of death and survival on 'La Bestia' (The Beast) – the infamous freight train which carries thousands of migrants towards 'El Norte', on which Martinez travelled eight times for this book – are only part of his fluid account ... Martinez reiterates that for migrants, knowledge is key. So many that he meets seem to have little idea what awaits them on their journey, perhaps because so few accounts like Martinez’s exist.
Read Full Review >>
See All Reviews >>
What did you think of The Beast?
© LitHub | Privacy