The Atlas of Disappearing Places: Our Coasts and Oceans in the Climate Crisis 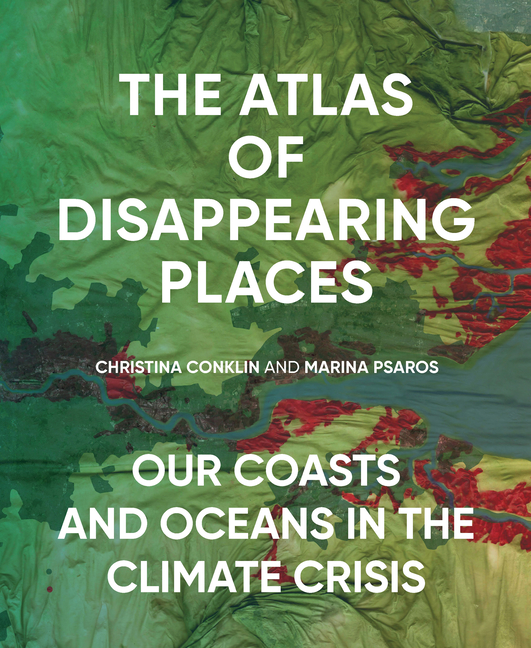 Through a combination of place-based storytelling, explanations of climate science and policy, and maps that use a unique ink-on-dried-seaweed technique, The Atlas of Disappearing Places depicts twenty locations across the globe, from Shanghai and Antarctica to Houston and the Cook Islands. The authors describe four climate change impacts—changing chemistry, warming waters, strengthening storms, and rising seas—using the metaphor of the ocean as a body to draw parallels between natural systems and human systems.

What The Reviewers Say
Positive Matt Jaffe,
The San Francisco Chronicle
After delving into Christina Conklin and Marina Psaros’ engaging and sometimes enraging The Atlas of Disappearing Places: Our Coasts and Oceans in the Climate Crisis, you may find it difficult to remain passive about climate change for a whole lot longer ... The atlas uses Conklin’s beautiful maps, each crafted from a sheet of green macroalgae that she bleached in the sun and transformed into parchment, to illustrate case studies that focus on vulnerable locations around the world. It serves as a compelling overview of the diverse range of dangers that pollution and climate change pose to marine environments and coastal cities ... Climate change can be pretty overwhelming, and the atlas succeeds in taking the impacts out of the realm of the theoretical and making them real ... Despite the efforts of Conklin and Psaros, the book isn’t always the most relaxing read. They acknowledge that some readers will dip in and out rather than going cover to cover. And if your earth science days are somewhere in the distant past, it’s best to simply slow down and absorb such terms as foraminifera, syzygy and the Paleocene-Eocene Thermal Maximum as they come up. The authors do their best to introduce and explain a dizzying array of scientific terms, and each chapter also takes an everyday word — technology, rights, power — and encourages readers to rethink them within the context of the natural world and environmental justice ... as dire as the situation may seem, Conklin and Psaros avoid eco-scolding and despair in favor of promoting awareness and individual actions.
Read Full Review >>
Positive Rebecca Foster,
Foreword Reviews
The metaphor of the ocean as a body that’s suffering from chronic inflammation and trauma is effective. Statistics and expert quotes are used to lend support to the book’s models without overwhelming its storytelling ... Painted with water-soluble inks on sheets of dried seaweed, the book’s maps are textured, attractive, and informative. They complement its suggestions for practical ways to reduce climate impact, like cutting single-use plastics, eating less meat, and getting involved in environmental advocacy. 'What we do, and when, matters,' the book insists. Climate change is not just about melting ice caps and starving polar bears, and The Atlas of Disappearing Places brings that reality home.
Read Full Review >>
Positive The Chicago Review of Books
At a time when the latest doom-and-gloom news is just a swipe away, it can be difficult to find new ways to make the climate crisis feel vital again. The Atlas of Disappearing Places succeeds by approaching the subject from a place of hope and beauty, combining place-based storytelling and scientific data with exquisitely-rendered maps of twenty vulnerable locations across the globe. The rare coffee table book that’s also a call to arms.
Read Full Review >>
See All Reviews >>
SIMILAR BOOKS
Nature

How to Speak Whale: A Voyage Into the Future of …
Tom Mustill
Positive
History

Pests: How Humans Create Animal Villains
Bethany Brookshire
Rave
What did you think of The Atlas of Disappearing Places: Our Coasts and Oceans in the Climate Crisis?
© LitHub | Privacy