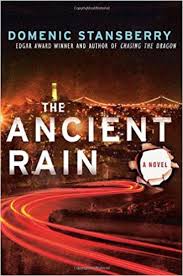 In the third installment of the Dante Mancuso series, Dante investigates a 30-year-old murder case involving an old colleague. But soon the investigation takes unexpected turns and he learns the hard way that some murders never get old.

What The Reviewers Say
Rave Marilyn Stasio,
The New York Times Book Review
This underrated crime writer really gets under the hood of this part of the city in The Ancient Rain, the third novel in a habit-forming series about Dante Mancuso, a private eye who knows everyone to talk to — or goes to the funeral of anyone unable to talk ... As Dante works his sources — a vivid gallery of old-timers clinging to an eroding culture — he broods on the changes since 9/11, eloquently conveying the paranoia that can have a community seeing terrorists on every corner.
Read Full Review >>
Rave Bill Ott,
Booklist
The third volume in Stansberry’s Dante Mancuso series again draws effectively on the rich history of San Francisco’s North Beach neighborhood ...split the difference here with a gripping noir mystery that takes its plot from events during the radical 1970s, the time of the Symbionese Liberation Army ... Attempting to track back the initial investigation of the crime, Mancuso resurrects old wounds and simmering resentments as he ponders whether his friend is telling him the truth ... a solid enough mystery, oozing the kind of palpable North Beach atmosphere that fans of the series have come to expect, but what makes Stansberry stand out from the crowd is the genuine noir sensibility he brings to his work, the overwhelming feeling that things must go wrong.
Read Full Review >>
Positive Kirkus
Like Dante Mancuso, Bill Owens is a San Francisco private eye. As he explains over the phone, he’s in a serious jam. About to be charged with murder, he needs Dante to cast a protective eye over his two frightened kids. Though Owens is more colleague than friend, hard-shelled, mushy-hearted Dante agrees and is quickly carried back nearly 30 years, when the crime for which Owens is in the process of being cuffed was the stuff of major headlines ... Hired by Owens supporters for reasons almost as convoluted, Dante finds himself a central figure in an investigation that does nothing but take unexpected turns, some of them achingly personal ... Predictably bleak—Stansberry has always walked on the noir side—but this brilliantly imagined version of real events packs an emotional wallop genre fiction rarely delivers.
Read Full Review >>
See All Reviews >>
SIMILAR BOOKS
Fiction

The Devil Takes You Home
Gabino Iglesias
Positive
What did you think of The Ancient Rain?
© LitHub | Privacy