The Accident on the A35: An Inspector Gorski Investigation 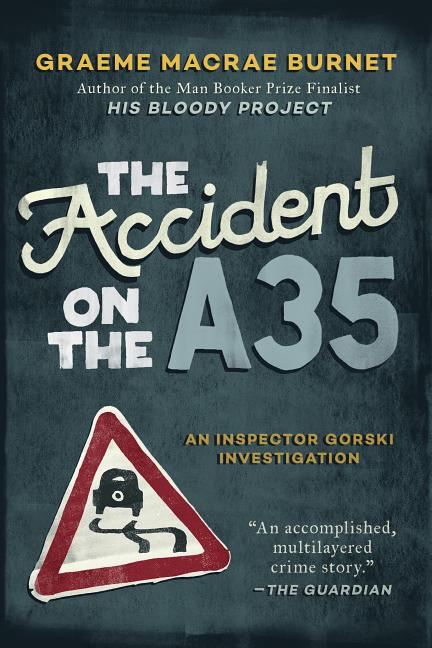 In the followup to Burnet's Man Booker-nominated The Disappearance of Adèle Bedeau, Detective Gorski investigates the death by car accident of a respected solicitor. At the same time, the solicitor's rebellious son, drunk on Jean Paul Sartre novels, is conducting an investigation of his own. Their independent, dual inquiries lead the reader down a twisted road marked by seedy back rooms and bar brawls.

What The Reviewers Say
Rave Anthony Cummins,
The Observer
The narration has the simple momentum of classic crime writing, heavy on lit cigarettes, light on subordinate clauses ... Unflashy yet highly accomplished, The Accident on the A35 works on several levels ... It has a denouement like something out of Greek tragedy but delivers as a proper police procedural too ... Burnet’s cleverness doesn’t get in the way of your enjoyment but playfully adds levels of meaning. The biggest teaser is the revelation that L’Accident sur l’A35 was only one of two manuscripts in the package [the author claims to have filled with documents]. What the other one was, he doesn’t say; I doubt I’ll be the only reader keeping my fingers crossed for another Gorski.
Read Full Review >>
Positive Tom Nolan,
The Wall Street Journal
The surprises in The Accident on the A35...are droll and subtle ... the novel seems at first to be a familiar enough police-procedural, similar in style to Georges Simenon’s Inspector Maigret books. But police chief Georges Gorski—an ill-at-ease, heavy-drinking man with a fractured marriage...is no Maigret. He seems more like one of the put-upon characters in Simenon’s other works: an ordinary type susceptible to 'human nature,' caught up in pathetic events ... The Accident on the A35 is wrapped between a foreword and afterword, each presenting the novel as a posthumously published manuscript by one 'Raymond Brunet,' as translated and introduced by Mr. Burnet, the real-life author. The latter’s pocket-biography of Brunet suggests that the events of this work had roots in the fictional author’s own life—adding a layer of conceptual icing to this delectable pastiche.
Read Full Review >>
Mixed Mark Lawson,
The Guardian
So with characteristic trickiness, Macrae Burnet has constructed a fake mystery novel that may reveal the truth about a fictional novelist. While trying to work out what’s happening in a complex story, we must always read beadily between the lines ... Neatly, in a plot already resting on old books, what people are reading—Balzac, Baudelaire, Zola and Sartre—enjoyably inflects both prose and plot. The main presiding literary spirit, Simenon, would surely have approved of a tense, strange funeral scene, and the successive expectation reversals three chapters from the end ... The conceit that the novel wasn’t actually written by Macrae Burnet pays off less happily in stretches of prose that it’s hard to believe really were composed by a Man Booker prize-shortlisted author ... Postmodernism may mean never having to say you’re sloppy, but it takes great charity to see these repetitions as a gag about the dodgy quality of English translations from foreign novels ... It is a measure of both the extravagant talent of Macrae Burnet and the high jeopardy of metafictional disappearing acts that such a continuation of his tricks could either be a triumph or a disaster. The second book is always closer to the former, but disguise novels risk falling flat on their faces, and it would be a pity if GMB made his whole career from them.
Read Full Review >>
See All Reviews >>
SIMILAR BOOKS
Fiction

Girl A
Abigail Dean
Rave
What did you think of The Accident on the A35: An Inspector Gorski Investigation?
© LitHub | Privacy