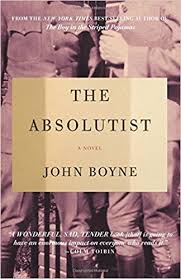 John Boyne's novel documents the lives of two inseparable men navigating the trenches of WWI and the ramifications of a taboo involvement.

What The Reviewers Say
Positive Nancy Wigston,
The Toronto Star
A First World War veteran spills his secrets in this novel by Irish writer John Boyne ... Yet from the start, things are off-kilter ... Disgrace, we discover, has been central to Tristan’s young life. Boyne’s calm, measured prose erupts from time to time in bursts of unexpected shock, like exploding shells ... We realize we are reading the recollections of an elderly writer, seeing in his mind’s eye his younger self... A polished storyteller, Boyne takes us down a trail we think we recognize only to surprise us with a wartime tragedy about class, anger, and revenge.
Read Full Review >>
Mixed Andrew Martin,
The Guardian
The Absolutist is another wartime story, but this time it's the first world war. It depicts a relationship between two soldiers, Tristan Sadler and Will Bancroft, the latter of whom gravitates towards being the most extreme form of conscientious objector, refusing any role at all in the campaign: an absolutist ... With Williams, that sort of thing would have been followed by an amusing lurch into the demotic, but The Absolutist contains no humour whatsoever ... There are references to 'jokes and japes' among the men, but none is adduced. In fact, the whole book felt to me numb, generic ...will undoubtedly work for some readers but I felt it was better suited to a short book for children than a full-length novel for adults.
Read Full Review >>
Rave Matthew Jackson,
BookPage
The Absolutist might be his most intimate story yet—a journey inside the mind of a man who’s seen the horror of war, and the tale of his quest to somehow find peace in the lonely aftermath ... Tristan bears the scars of war on his body, but the real reason for his journey is the scars on his heart. The world knows only that Tristan and Will were friends, and how Will officially met his end ...is surprisingly slim. Boyne conveys the period accurately and elegantly, but the characters—specifically Tristan, who narrates—are the stars ... This is a different kind of journey into the darkness of war, told by a gifted, powerful novelist, and the result is a book with an often staggering emotional punch.
Read Full Review >>
See All Reviews >>
SIMILAR BOOKS
Coming Soon

A Trail of Crab Tracks
Patrice Nganang
Positive
What did you think of The Absolutist?
© LitHub | Privacy