The Abolition of Species 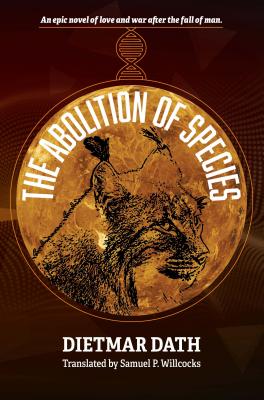 After mankind's near-extermination, a kingdom of animals harnessing biotechnology wages a multi-planetary war against a new form of artificial intelligence.

What The Reviewers Say
Rave William Grabowski,
Library Journal
The novel of big ideas isn’t dead, and German author Dath proves few things are more satisfying in sf with a literary bent than mingling high-brow cultural speculation with low-brow humor, cautioning the reader to remember that humanity (at least for now) is dominator of the only game in town ... Readers who favor the sensual detail and daring brilliance of Brian Aldiss, Samuel R. Delany, Carol Emshwiller, George R.R. Martin, and Frank Herbert will find much to enjoy in this dazzling translation of a writer little known in North America
Read Full Review >>
Rave Michael A. Morrison,
World Literature Today
The Abolition of Species is essentially a philosophical inquiry into evolution and identity, enmeshed in a plot that partakes of (and sometimes subverts) many story types: political thriller, war novel, quest narrative, tale of speculative future science—even coming-of-age story. Dath’s elaborate plot, populated by a mélange of posthuman life forms, explores an urgent concern: what will happen to the meaning of 'human' once technology can enable evolutionary powers heretofore reserved to nature? This novel demands sustained attention; immersion in its philosophical, scientific, aesthetic, and political concerns; and no small amount of persistence. But don’t let that put you off. In Samuel P. Willcocks’s masterful translation, The Abolition of Species is a transgressive revelation, a worthy philosophical successor to Wells’s generative novel.
Read Full Review >>
Positive Regina Schroeder,
Booklist
This is a dense historical narrative, with an arc of centuries, but it is worth the effort. The long-lived characters provide a slow-growing framework to a story that ultimately leads to a promising, open-ended conclusion.
Read Full Review >>
See All Reviews >>
What did you think of The Abolition of Species?
© LitHub | Privacy