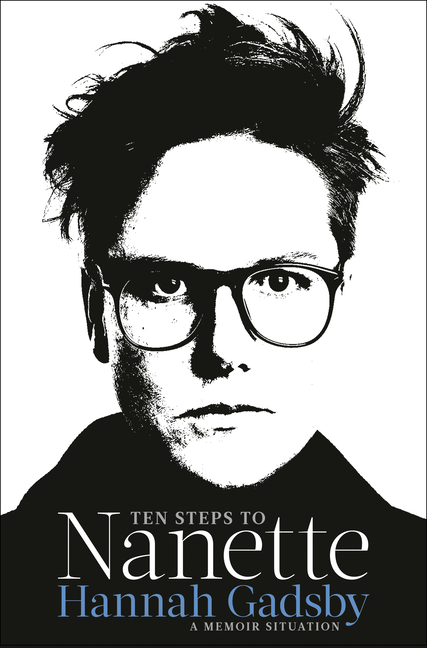 Hannah Gadsby "broke comedy" with her show Nanette when she declared that she was quitting stand-up. Now she takes us through the defining moments in her life that led to the creation of Nanette and her powerful decision to tell the truth—no matter the cost.

What The Reviewers Say
Positive Thomas Floyd,
The Washington Post
... enthralling and occasionally vexing ... Although Ten Steps to Nanette has the trappings of a memoir, as Gadsby embeds her memories with wit, reflection and self-deprecation, she eschews convention by meticulously framing her life through her defining work ... It’s when Ten Steps veers into more straightforward autobiographical territory that it loses steam. Much of the first half is dedicated to a year-by-year recollection of Gadsby’s youth that’s exhaustive and, at times, a tad exhausting ... she still packs her road to Nanette with too many detours and traverses them too leisurely ... That’s not to say the first half doesn’t provide insight ... In Ten Steps, she is understandably vague [about her trauma] but remarkably vulnerable ... For a memoir where pain is a through line...it shouldn’t surprise that Ten Steps, like Nanette, can be light on laughs. But they’re certainly there, especially in pithy footnotes that Gadsby wields to great effect.
Read Full Review >>
Positive Victoria Segal,
The Sunday Times (UK)
In part Ten Steps to Nanette functions as a bleak artist’s notebook, an account of how she ended up on stage at the Sydney Opera House that January, as well as an almost conventional 'memoir situation' ... She writes beautifully about her culturally stodgy childhood ... This book is more than a Nanette expansion pack: parts of it easily stand alone. She writes about her autism with a zoomed-in brightness ... Yet it does demand readers are as fascinated by the whirr of her processes as she is ... Bluntly, whether you love this book will depend on your attitude towards a footnote saying 'I’m triggering all of the warnings', but as a document of what can happen when a different kind of voice seizes the conversation, Ten Steps to Nanette shows Gadsby taking control of the page along with the stage.
Read Full Review >>
Rave Dana Dunham,
Chicago Review of Books
Just like the show its title references, Ten Steps to Nanette is honest, incisive, self-referential and very funny, with the author’s wry humor threaded throughout its pages, her trademark asides transformed into frequent footnotes ... Within the parameters Gadsby lays out, she creates a lush landscape around a remarkable hour of performance that adds to its already considerable depth ... These threads of context intensify the show’s pain, but they also enhance its humor ... In Ten Steps to Nanette, Gadsby also offers more technical contextual details for the show itself that its fans will savor ... Any artist, any creator should value the chance to examine the composition of this revolutionary work, and the context from which it came.
Read Full Review >>
See All Reviews >>
What did you think of Ten Steps to Nanette: A Memoir Situation?
© LitHub | Privacy