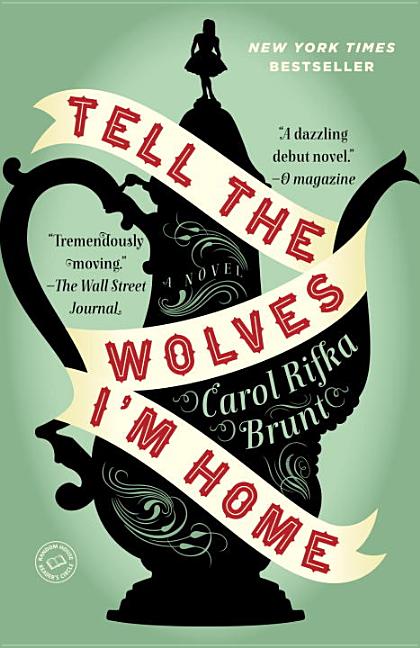 Carol Rifka Brunt's literary debut is a tender story of love lost and found. Two lonely people—fourteen-year-old June Elbus and Toby, a stranger she encounters at her beloved uncle's funeral—become the unlikeliest of friends and find that sometimes you don’t know you’ve lost someone until you’ve found them.

What The Reviewers Say
Rave Stephenie Harrison,
Book Page
Carol Rifka Brunt’s astonishing first novel is so good, there’s no need to grade on a curve: Tell the Wolves I’m Home is not only one of the best debuts of 2012, it’s one of the best books of the year, plain and simple ... In a literary landscape overflowing with coming-of-age stories, Tell the Wolves I’m Home rises above the rest. The narrative is as tender and raw as an exposed nerve, pulsing with the sharpest agonies and ecstasies of the human condition. Exploring the very bones of life—love, loss and family—this compassionate and vital novel will rivet readers until the very end, when all but the stoniest will be moved to tears. If Brunt has managed to produce this stunning novel on her first attempt, there is no telling just how far her star will rise.
Read Full Review >>
Positive Samantha Nelson,
AV Club
The novel provides an earnest look at the burdens of choice and the fear of missed opportunities, all while weaving a beautiful portrait of the complicated relationships between family members ... Brunt weaves a terrific coming-of-age story, painting a vibrant picture of June’s dreams and insecurities as she teeters on the border between childhood and maturity ... The complexity of the relationship between June and her older sister Greta provides the book’s richest material ... The book’s only real weakness comes when June’s narrative changes from the present to some future version of herself looking back on the events ... These interludes break up the action by describing June’s emotions, even though Brunt’s writing already does a good job of showing them. Her maudlin musings come particularly heavily at the end, and reduce the impact of the bittersweet climax. But the impact of the rest of Brunt’s novel makes this a striking first outing.
Read Full Review >>
Rave Stevie Godson,
The New York Journal of Books
The over-harvested themes of first love and lost souls are plucked and shaken up in Tell the Wolves I’m Home, Carol Rifka Brunt’s hugely intelligent and moving debut novel ... Through the eyes of 14-year-old June and the language of a talented author, these twin themes are almost exquisitely painful in that inexplicable way a thing of unexpected beauty—a piece of music, a baby’s smile—can pierce your heart and leave you breathless.
Read Full Review >>
See All Reviews >>
SIMILAR BOOKS
Fiction

Aesthetica
Allie Rowbottom
Positive
What did you think of Tell the Wolves I'm Home?
© LitHub | Privacy