Talking to Strangers: Selected Essays, Prefaces, and Other Writings, 1967-2017 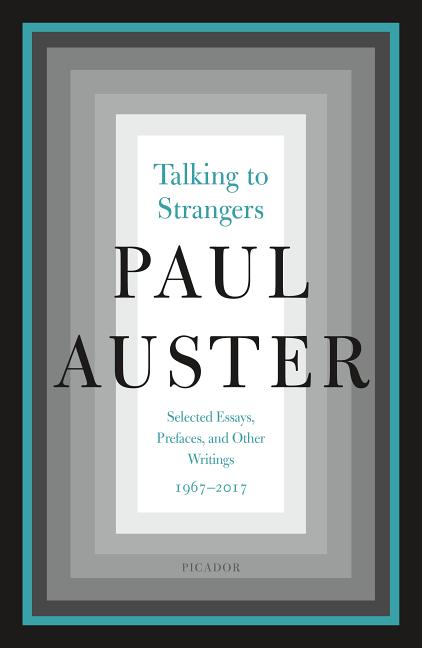 Talking to Strangers is a freshly curated collection of prose, spanning fifty years of work and including famous as well as never-before-published early writings, from 2018 Man Booker Prize–finalist Paul Auster.

What The Reviewers Say
Positive Lonnie Weatherby,
Library Journal
...pieces both personal in tone and elucidating in content. The most surprising and beguiling entry is Auster’s preface to Nathaniel Hawthorne’s published diary of the three weeks Hawthorne minded his five-year-old son Julian during his wife’s absence (Hawthorne at Home). The most poignant and heartbreaking is his account of the brief life and death...of nine-year-old Anatole Mallarmé (Mallarmé’s Son)... Despite the padding of several slight and flimsy items, this compilation will gratify Auster readers and grace most library shelves.
Read Full Review >>
Rave Zachary Houle,
Medium
...a breathtaking, stellar read of non-fiction ... Talking to Strangers if it has a fault, is really all over the map. It is such a loose collection of writings that one has to wonder if the sole reason behind its publication has to do with the fact that Auster is writing another long novel and needed a stop-gap collection just to pay his mortgage ... Regardless of the reason, I devoured this book. I read it in the course of a couple of sittings, and was saddened when it was done ...This might not be the best starting point for the Auster neophyte...but for the dedicated reader of Auster’s work, this book is a bit of a marvel.
Read Full Review >>
Positive Kirkus
An eclectic collection ... One of the most engaging essays is also one that another writer or editor might have shoved, forgotten, in a drawer: a lecture from 1982 at Seton Hall that becomes a fascinating exploration of the influence of European readership on Edgar Allan Poe, which is particularly interesting considering how popular Auster would become in Europe. Later in the collection, the essays branch out from literature to other art forms, as Auster writes about filmmaker Jim Jarmusch, illustrator Joe Brainard, and even New York Mets pitcher Terry Leach. They also turn more personal, with the author examining everything from an ode to his beloved typewriter ... This isn’t essential Auster, but fans and scholars of his work will undoubtedly be charmed and intrigued by his evolving thoughts on art, language, and other assorted topics.
Read Full Review >>
See All Reviews >>
What did you think of Talking to Strangers: Selected Essays, Prefaces, and Other Writings, 1967-2017?
© LitHub | Privacy