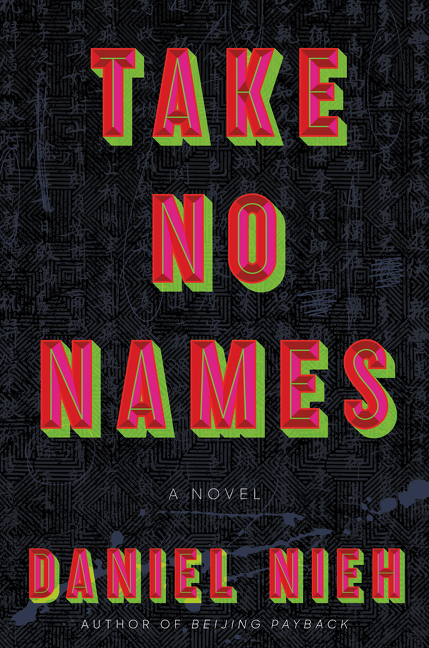 A thriller about a young man on the run from a furtive past, in search of a quick payday in Mexico City, who finds himself in the crosshairs of a dangerous international scheme.

What The Reviewers Say
Positive Adam Sternbergh,
The New York Times Book Review
... a thriller for the global age, with characters tangled in cross-border conflicts and international intrigues ... The action is brisk, the dialogue snappy. Once the pair arrive in Mexico City, the story crackles, feeling nicely plugged in to the overheated power grid of an interconnected world ... Then Take No Names detours into an entirely different novel, shifting abruptly toward global skulduggery, corporate malfeasance, secretive paramilitary units and spectacular explosions — something more akin to “The Bourne Identity” than The Maltese Falcon. Maybe this is Nieh’s moment to rip away the facade and reveal the world’s corrupt inner workings. But as a consequence, the novel becomes untethered from the engaging, human-scale story that’s grounded it so far. Some readers may enjoy this bait and switch, while others, like me, might feel wistful for the more modest road-trip novel they’ve been enjoying so far ... Still, by the end Nieh has laid out a handy road map for global noir in the modern world: characters torn between nations, exploiting a system that is itself inherently exploitative, getting swept up in international currents that they barely comprehend. If one lesson of classic noir was that the world isn’t always as it appears to be, Nieh’s novel embraces a different viewpoint: The world is crazier than you know and maybe even slightly crazier than you’d hoped.
Read Full Review >>
Positive G. Robert Frazier,
BookPage
... a blast from start to finish, a classic crime thriller that shifts into an over-the-top action romp ... Victor and Mark are particularly likable, a pair of outcasts who have forged a unique and unexpected friendship ... Nieh, who has lived in the United States, China and Mexico, maintains a steady balance of humor, action and thrills, while also making some barbed commentary on American capitalism and Chinese globalization. The twists and turns come often, keeping the intrepid Victor and Mark on their toes as they run for their lives from one chapter to the next. What starts as a Joe R. Lansdale-esque crime thriller morphs halfway into an espionage caper à la Mission Impossible. If it sounds a bit over the top, it is—but that’s what makes Take No Names such an irrepressibly fun read.
Read Full Review >>
Positive Kirkus
A big improvement over Nieh's debut, Beijing Payback (2019), the new book combines biting humor, breathless action scenes, a clever presentation of mixed languages, and dark geopolitical commentary, including an indictment of America's own duplicity. It’s a lot of fun ... A cutting thriller with nonstop action and twisty consequences.
Read Full Review >>
See All Reviews >>
SIMILAR BOOKS
Fiction

The Devil Takes You Home
Gabino Iglesias
Positive
What did you think of Take No Names?
© LitHub | Privacy