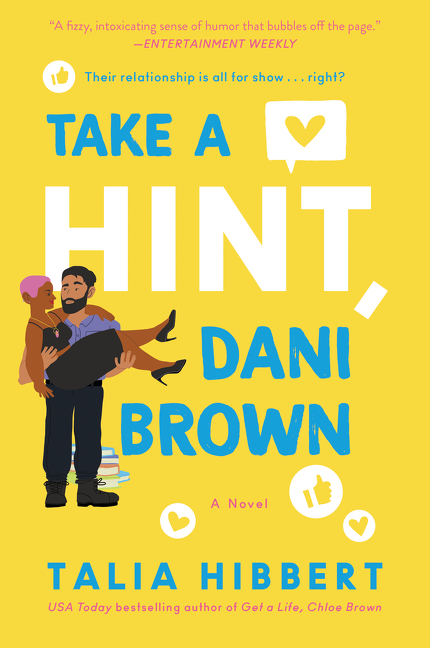 Talia Hibbert returns with another romantic comedy about a young woman who agrees to fake date her friend after a video of him "rescuing” her from their office building goes viral.

What The Reviewers Say
Rave Amanda Diehl,
BookPage
... an easy contender for best book of the year ... Hibbert knows how to deepen and complicate her characters, meticulously peeling back layer upon layer as the story goes on ... What makes Take a Hint, Dani Brown a superlative example of the romance genre as a whole, and not just a gem in the contemporary category, is that Hibbert gets to the essence of what a happily-ever-after means. It’s not about love as the antidote to a couple’s problems, but love becoming a foundation on which the couple understand one another better and a soft place to land when times are tough ... Fans who loved the first book in the Brown Sisters series, Get a Life, Chloe Brown, may feel that it’s a tough act to follow. Fear not. Take a Hint, Dani Brown possesses the same amount of charm, grit and, certainly, sex appeal as its predecessor. Zaf is the emotionally competent, buff hero of our dreams. Dani is the heroine we all aspire to be: confident, feminist, sex-positive and driven. Read this romance immediately, and then read it again.
Read Full Review >>
Rave Maureen Lee Lenker,
Entertainment Weekly
... sublime ... Hibbert has this incisive ability to cut right to the heart of something, and she does it again here with anxiety, grief, and feelings of inadequacy. She describes anxiety in piercingly true ways. Her books are buoyant with compassion. Zaf and Dani are filled with tremendous care for each other ... In this winking, divinely funny tale of a fake relationship turned real, Hibbert finds space to unpick everything from toxic masculinity to racism in academia to romance as balm (shout-out to her Beverly Jenkins reference). It engages directly with popular criticism that romance is unrealistic, perhaps even detrimental, by framing it as Zaf’s saving grace in combatting his mental anguish. Happy endings, as Zaf points out, aren’t formulaic spoilers, they are safety nets. But it also takes care to validate those less engaged with romance with a capital 'R' with its love for Dani just as she is, if only she’ll let down her walls. Like her heroine, Hibbert blends insightful literary and cultural commentary with a love story that’s exuberant, hilarious, and restorative. She writes with astonishing empathy, but never pity, both seeing and demanding the best in her characters and her readers. Take a Hint, Dani Brown is a burst of sunshine, as happy and bright as the daffodil yellow of its cover, and we’d gladly bask in its light endlessly.
Read Full Review >>
Rave Smart Bitches Trashy Books
I knew exactly where the book was going to go and I could not put it down. Honestly, I’m reading it a third time ... One of the big strengths of this book is how the friends-to-lovers plot is set up ... It’s like, you’re welcome, you just checked off half of the Ripped Bodice Summer Bingo ... The whole fake dating set up is pretty silly, but it also feels really right. Dani and Zaf are a couple that just need a little push from the universe, a little cover from coincidence to act on what they actually want. And frankly, I am here for it ... I cannot emphasize enough how much fun it was reading this book, despite the kernels of sadness ever present in the main characters ... If you are a WOC, and in particular a Black woman, what this story gives you is a narrative that is undeniably about a Black woman, but it already assumes you know how hard it is to be one. You aren’t told how isolated Dani is in her academic pursuits; all you know is that she is meeting her hero, a Black woman who is a tenured professor in her area of study, and it means everything to her. There are no details into what specifically far-right journalists were doing and saying to poor Zaf because you already know how Muslims have been hounded daily for daring to exist. It’s a book version of the friend who knows ... This is a hopeful, silly, and sweet book ... doesn’t make tragedy the predominant narrative of a story about two people of color existing and finding love. It’s there and it’s theirs, but it is not everything. And that is a relief. Everyone has joy, has the right to joy, and should be able to grab at that joy. That’s what Take A Hint, Dani Brown is all about — it’s a truly lovely book about snatching at that joy right in front of you, with a bit of Black Girl Magic and some Black girls doing magic. This is one for the keeper shelf.
Read Full Review >>
See All Reviews >>
SIMILAR BOOKS
Fiction

How to Fail at Flirting
Denise Williams
Positive
What did you think of Take a Hint, Dani Brown?
© LitHub | Privacy