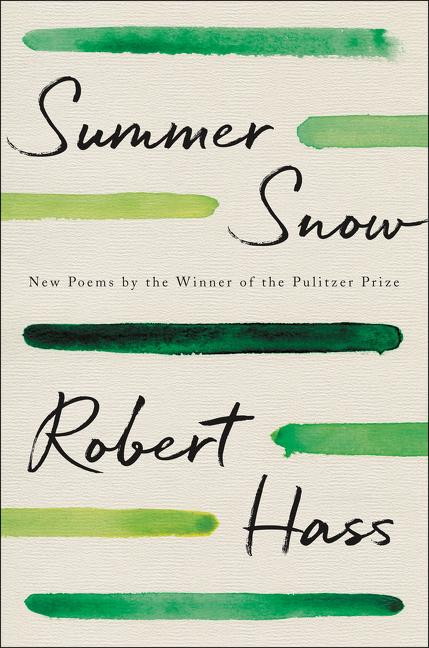 In Summer Snow, his first collection of poems since 2010, Hass further affirms his position as one of our most highly regarded living poets. Hass’s trademark careful attention to the natural world, his subtle humor, and the delicate but wide-ranging eye he casts on the human experience are fully on display in his new collection.

What The Reviewers Say
Rave Craig Morgan Teicher,
The New York Times Book Review
Hass is almost 80 and I am entering middle age; I’ve got two kids, have had my brushes with fortune and misfortune, am deeply angry and dismayed about the state of America, and I find that Hass’s poems move at exactly the speed I need and make a hell of a lot of sense. He writes poetry for grown-ups, and, alas, I have become one ... a book that looks meaningfully back on the long life it took to write it ... It’s a big book, but never feels exhaustive or overstuffed. Some may find that Hass has grown too comfy in his effusive style and his old lefty politics but to me it all sounds like mastery, like singular virtuosity attained on a very popular instrument — common American speech ... Summer Snow is rife with elegies. It’s something of a Who’s Who of great writers who have died in recent decades ... The unthinking cruelty of fate is too vast and unfathomable to summarize or explain, so Hass just sits with it with us, aghast, stumped and sad, but also unwilling to leave us behind or be left alone with all that weight ... Yes, life is a breath, and what kills us is never actually what kills us, and the fabric of our days dissolves, leaving only paltry lists of achievements ... Of course I had no idea what Hass was talking about when I was 20, no idea that he had anything to offer me. But he does now, and when I return to this book in 20 years, or in 40 if I’m so lucky, it will still be waiting for me, with something new to say.
Read Full Review >>
Positive Dan Chiasson,
The New Yorker
Hass’s work is a fifty-year standoff between concentration and dispersal: part haiku, part road trip ... Summer Snow, with its patient count of tanagers, warblers, aspens, and gentian, its year-after-year audit of the dead, its tallies of everything from our country’s drone strikes to his friends’ strokes, is Hass’s inner history of the decade. It arrives right on time ... A Hass poem is a site of instruction, sometimes handed down from Hass’s own masters, like Eugenio Montale, Czesław Miłosz, and Stanley Kunitz. But it’s equally a site of distraction. Hass’s poems about his mentors are full of background, ambience, human overspill; the nugget of inherited wisdom is almost always ironized by circumstance ... This is the core feature of Hass’s work, in my view: an Etch A Sketch method that allows the surface of the completed poem to be erased and revised, with traces of previous attempts, along with gaps for when the lightning strikes. By my unscientific count, these gestures have only become more plentiful in the course of Hass’s career ... When I teach Hass, I always ask my students what they think of these fill-in-the-blanks passages. The response is a mixed bag; people have different histories with performed modesty. I love these moments and have learned from them how to do certain things in my own poems, but I’m also watchful, a little distrustful of that extended open hand.
Read Full Review >>
Positive Heather Treseler,
Los Angeles Review of Books
Summer Snow... continues his lifelong exploration of the fiat of desire; the brutal beauty of the natural world; and song as a gnosis as profound as history or philosophy ... It is as if, having proven his mastery of the meditative lyric and its variations, Hass now wants to escape the constraints of the elegant structures he has helped to codify ... Yet the most memorable poems in the book still reside in Hass’s bailiwick: the lyric mode, in its various moods ... Poems...showcase his dexterity with vernacular, an imagistic discipline borrowed from haiku, and an instinct for the flint of narrative. Hass is also a master of the prose poem ... Hass’s forays into new territory and looser narrative structures are not always successful. When he strays too far from embodied experience, the poems fall flat ... Luckily, we have not needed Hass to be a desert prophet or proselytizer. As the Orpheus figure of his generation, one that struggled to know itself and justify its pleasures, he has had other work to do—naming desires that would otherwise remain inchoate and bewildering.
Read Full Review >>
See All Reviews >>
SIMILAR BOOKS
Fiction

Fantasia for the Man in Blue
Tommye Blount
Rave
What did you think of Summer Snow: New Poems?
© LitHub | Privacy