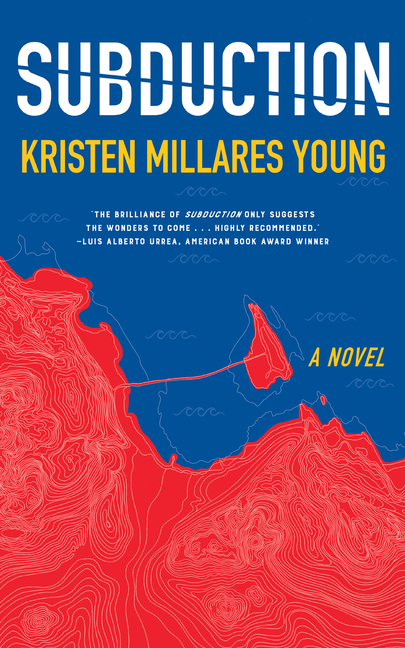 Fleeing the shattered remains of her marriage and a betrayal by her sister, in the throes of a midlife freefall, Latina anthropologist Claudia retreats from Seattle to Neah Bay, a Native American whaling village on the jagged Pacific coast.

What The Reviewers Say
Rave Kristina Tate,
The Rumpus
Young’s debut novel is a spiraling exploration into the complexities of betrayal and uncertainty, scattered like loose rubble beneath one’s feet ... Subduction’s plot proceeds with the forward motion of a river’s flow, at times gentle and meandering, then suddenly voracious, even dangerous ... filled with vivid imagery and lyrical language—nearly every chapter shows its characters observing the landscape, through varied, beautiful descriptions of birds and coastlines, while attempting to understand themselves and their respective pasts as they reaffirm nature’s power to heal ... Young masters the creation of a world whose secrets have long been protected, through both the eyes of an outsider coming in and an insider cast out. She captures, too, what it is to live in two worlds—for Claudia looking for a way in, and Peter for a way out—navigating the traditions of an ancient culture whose history has been pillaged, rooted out, and exploited, while also acknowledging the validity of the anthropologist’s work.
Read Full Review >>
Positive Ellen Akins,
The Washington Post
At its heart, Subduction is all about stories — the stories that constitute personal, family and cultural identity and, perhaps more important here, the stories that people tell, about themselves and to themselves, to make life meaningful and livable ... As the characters make their winding way toward the vaunted potlatch, there are passages of quiet beauty, deep emotion and sharp observation ... But lyricism and passion vie throughout with an academic impulse not unlike Claudia’s own ... whip-smart, if at times uneven.
Read Full Review >>
Rave Sarah Neilson,
The Seattle Times
... brilliant ... the book accomplishes something that only the best literature can: It asks the reader to wonder, and to reflect, and to ask crucial questions about society and identity. And it does so in a deeply entertaining and moving story. In less than 300 pages, the fast-moving but quiet plot of Subduction guides the reader on a journey that feels both disruptive—like an earthquake—and serene, like the rocking of a boat in gentle waves ... Most of all, the narrative doesn’t settle. It is an urgent odyssey that reverberates in the mind and body. In prose as drippy and lush as the moss and licorice ferns that green Pacific Northwest forests, Subduction shakes at the ground beneath all of our feet, avalanching us into a mess of colonialism, home and humanity.
Read Full Review >>
See All Reviews >>
SIMILAR BOOKS
Fiction

Vladimir
Julia May Jonas
Rave
What did you think of Subduction?
© LitHub | Privacy