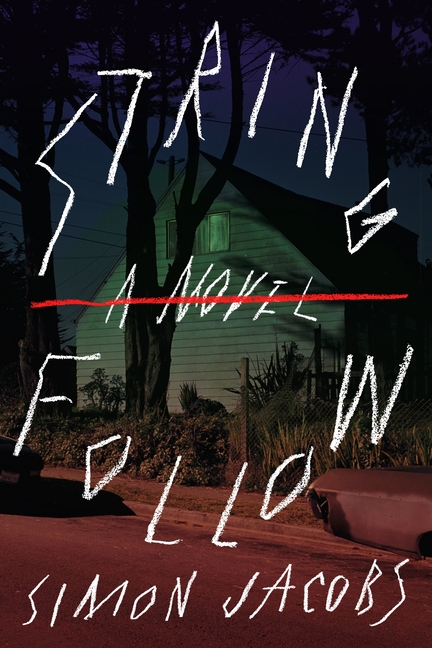 Something strange is happening to the teens in Adena, Ohio. A mysterious force is seeking inroads: vulnerabilities to exploit, friendships to hijack, untapped rage to harness toward its own ends. Who will serve it best? Claire is abrasive and aimless, embarrassed by her privilege. Weak-willed David entertains fantasies of cultish orgies, while Tyler covertly takes up residence in his basement. Greg wages war on the voices in his head, while his sister Beth quietly, furiously unravels. And at the center is the empathetic, naive Sarah. The force wants her most of all. But will she be the key to its success or its destruction?

What The Reviewers Say
Rave Carrie Chi Lough,
Grimdark Magazine
Simon Jacobs delivers an oddly curious and uncanny horror tale in String Follow ... In String Follow, Simon Jacobs does a brilliant job of portraying the youthful lives of those in the Midwest ... String Follow has a flair that is reminiscent of Donnie Darko and The Twilight Zone. Simon Jacobs’s prose is particularly notable. The way in which the author writes is spellbinding and invokes an atmosphere of dread. As enticing as it is unsettling, his prose is the highlight of this novel ... a dark and somber coming-of-age tale.
Read Full Review >>
Positive Publishers Weekly
[A] grimy, layered tale ... The result might be best described as 'hangout horror'—there’s no traditional plot to speak of as Jacobs dips in and out of the characters’ lives through the eyes of an invisible watcher ... Despite some near-Faulknerian passages zeroing in on the characters’ twisty inner lives, the meandering prose struggles to maintain momentum. Still, readers looking for a horrific take on coming of age may want to give this a try.
Read Full Review >>
Positive Kirkus
[A] terrifying glimpse into teen anomie and rootlessness and the ways violence can take root there ... The book is daring and stylish, occasionally even having flashes of black humor; Jacobs is a talented writer. But the darkness is so relentless and remorseless that the reader can feel pursued by it, punished ... Grim, violent Midwestern gothic—hard to watch, hard to turn away from.
Read Full Review >>
See All Reviews >>
SIMILAR BOOKS
Fiction