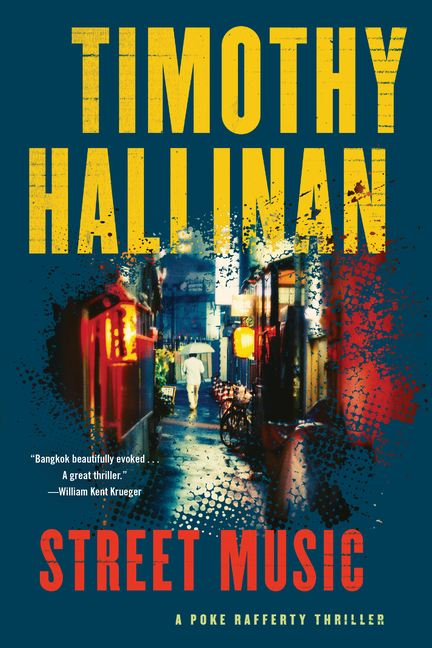 Eight years ago, Poke Rafferty, an American travel writer, and his Thai wife, Rose, adopted a Bangkok street child named Miaow, forming an unconventional intercultural family. Now that family is in jeopardy: the birth of Poke and Rose’s newborn son has littered their small apartment with emotional land mines, forcing Poke to question his identity as a dad and Miaow to question her identity as a daughter. At the same time, the most cantankerous member of the small gang of Old Bangkok Hands suddenly goes missing under suspicious circumstances.

What The Reviewers Say
Rave Joe Hartlaub,
Bookreporter
Street Music has been heavily publicized as the final installment in the long-running Poke Rafferty series ... Taking [Hallinan's] pronouncement at face value, it can be said with certainty that he has saved the best of himself for it ... It crossed my mind as I read the last page that, if it were possible to sustain some sort of low-grade, localized amnesia that left me without the ability to recall reading this book for all seasons, I would inflict it upon myself just for the joy of getting to experience it again for the first time. I’m really not kidding. It’s as funny, sad, horrific and memorable as anything you are ever likely to read. There are countless passages here that will stand up two, five or seven decades from now. It’s as good as it gets, and if you’re looking for something to read and linger over, you simply should not pass up Street Music--- or, for that matter, anything else that Hallinan has written.
Read Full Review >>
Rave Kirkus
Hallinan brings the Thailand-based adventures of expatriate travel writer Poke Rafferty...to a close with this ninth installment, which, like so many of the first eight, bears its readers back to a heart-rending past ... Even fans accustomed to Hallinan’s lurid, compassionate view of Bangkok may have to fight back tears.
Read Full Review >>
Mixed Publishers Weekly
...disappointing ... Best are the sections told from Hom’s perspective, in which Hallinan sympathetically presents her desperate attempts to stay alive and her shame about the choices she has made. Atmosphere and character overwhelm the plot. Series fans will best appreciate this one
Read Full Review >>
See All Reviews >>
SIMILAR BOOKS
Fiction

The Devil Takes You Home
Gabino Iglesias
Positive
What did you think of Street Music?
© LitHub | Privacy