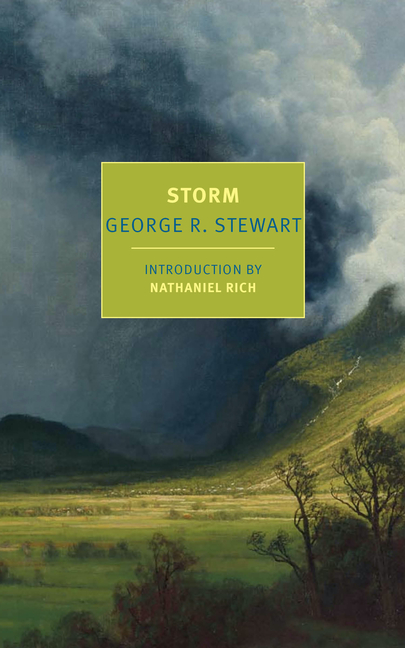 Originally published in 1941, Storm has been credited as the first example of eco-fiction. The novel tracks a developing storm privately named Maria by a junior meteorologist in San Francisco, following its progress to and beyond the shores of the United States through the eyes of meteorologists, linemen, snowplow operators, a general, a couple of decamping lovebirds and an unlucky owl.

What The Reviewers Say
Positive Andrew Schenker,
The Baffler
... the novel proceeds mosaic-like, providing glimpses of the characters charged with managing the storm while keeping the tempest itself very much in the foreground ... Storm alternates descriptions of Maria with short philosophical essays, glimpses of the natural world, and views of the civil servants who try to limit the impact of the ecological disaster they can’t control. These sections are scrupulously arranged so as to drive home specific causal points ... Everything, both manmade and natural, is connected in Storm’s ecosystem; everything that happens has wide-ranging consequences, the butterfly effect in full force ... Intensely dedicated to the study of process, the result of immersive research on his part, Stewart lovingly recounts the intricate details by which these people go about attempting to limit the damage of the storm. In genuinely suspenseful set pieces involving such dangerous situations as a flooded underpass and a snowed-over road, Stewart shows these people at their best, dutifully playing their part in the systems that humankind has developed over its many years of existence to prevent the unnecessary death and destruction that it has also, inadvertently, helped cause.
Read Full Review >>
Positive Nathaniel Rich,
The New York Review of Books
Storm is the second-strangest book ever written about a storm ... As Stewart elevates the storm to protagonist, and demotes his human beings to animal passivity, what seems at first a high-concept premise develops into something more radical ... Storm’s drama hangs on the influence of environmental conditions on human fate, on the revelation of indirect but profound connections between erosion, ice melt, and vermicular digestion on the intimate lives of Americans ... Stewart’s prose is never more rhapsodic than when he charts profound transformations that unfold over vast, inhuman stretches of time ... He is...a poet-ethicist in the tradition of John Muir, Aldo Leopold, and Annie Dillard, a dramatist of the natural order and our fragile standing within it.
Read Full Review >>
Positive Kirkus
A new introduction by Nathaniel Rich provides historical context for Stewart's reissued classic, first published in 1941. Pure excitement for eco-fiction fans.
Read Full Review >>
See All Reviews >>
SIMILAR BOOKS
Fiction

What's Done in Darkness
Laura McHugh
Rave
What did you think of Storm?
© LitHub | Privacy