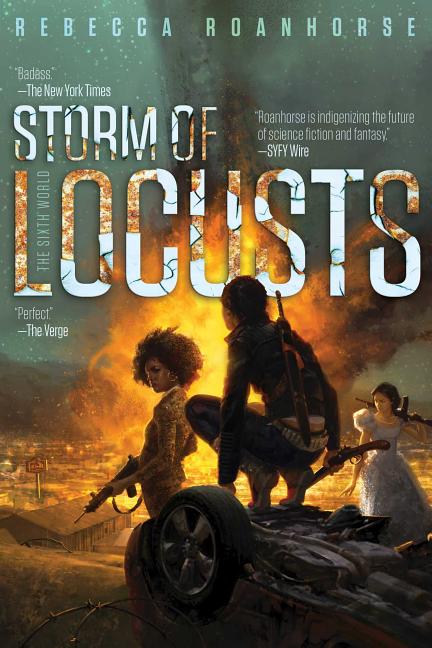 The winner of the Nebula and Hugo awards returns with the second book in her Sixth World series, Kai and Caleb Goodacre have been kidnapped just as rumors of a cult sweeping across the reservation leads Maggie and Hastiin to investigate an outpost, and what they find there will challenge everything they’ve come to know.

What The Reviewers Say
Rave Alex Brown,
Tor.com
Storm of Locusts might be the rare sequel that’s even better than the first. Roanhorse spends as much time building out the physical world as much as she does the characters ... It’s clear Roanhorse spent a lot of time thinking about how the west and southwest would function in the aftermath of the apocalypse, the collision between Indigenous cultural attitudes, religious fervor, and the lawless wild wild west of Hollywood myth ... Rebecca Roanhorse delivers another tense tale of betrayal and revenge set against the backdrop of a post-apocalyptic American southwest. Maggie Hoskie is everything I’ve ever wanted in a protagonist, and watching her grow as a person is thoroughly enjoyable. There’s nothing else quite like the Sixth World series and I never want it to end.
Read Full Review >>
Rave Arkady Martine,
NPR
Widening is a characteristic feature of Storm of Locusts. There is a widening of scope ... Roanhorse also accomplishes a widening of emotional range ... It pushes the reader to think about the struggles of being not quite of one people and not quite of another, the problems of not ever really being able to come home to a home that was stolen from you as a child. In this exploration, Storm of Locusts is a triumphant book—one which weaves fundamental questions of assimilation and diaspora into a fast-paced, action-filled adventure that puts a completely Indigenous spin on the post-apocalyptic Wild West narrative ... Sharp, exciting, dramatic, and entirely rooted in a Navajo sensibility which is both strikingly new to the genre and should have been with us all along.
Read Full Review >>
Rave Adrian L. Jawort,
Los Angeles Review of Books
Roanhorse excels at connecting readers with the land itself as a character. Her prose is not sappy or overwrought, but it nevertheless captures the smell, heat, and sights surrounding Maggie with a tension and flow that feels completely alive ... The novel is full of fresh, fascinating human and preternatural characters, each drawing readers further into Maggie’s world. Roanhorse’s depiction of Diné 'trickster' Coyote as a shapeshifting human, for instance, is spellbinding, as we’re struck by their calming presence, yet never sure of their intentions, and consistently curious about Maggie’s casual (if guarded) rapport with them.
Read Full Review >>
See All Reviews >>
SIMILAR BOOKS
Fiction

The Deceptions
Jill Bialosky
Positive
What did you think of Storm of Locusts?
© LitHub | Privacy