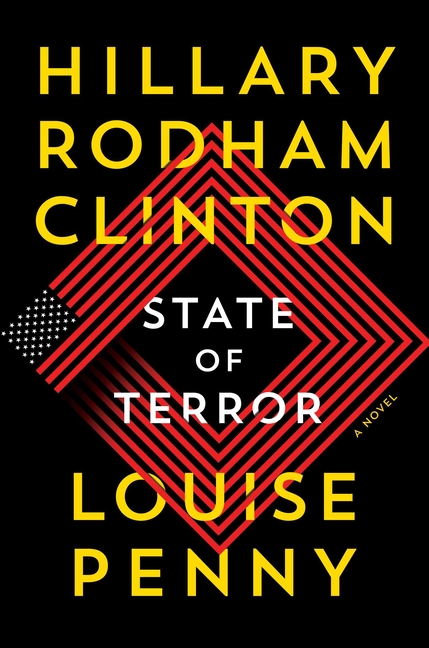 Follows Ellen Adams, a novice Secretary of State, who has joined the administration of her rival, a president inaugurated after four years of American leadership that shrank from the world stage.

What The Reviewers Say
Rave Sarah Lyall,
The New York Times
...while Bill’s characters speak loudly and wave their big sticks (they are men), Hillary’s listen intently and use their keen understanding of human nature to outmaneuver their adversaries (they are women) ... The plot in State of Terror is ambitious and apocalyptic. Nothing less than the future of the world is at stake ... don’t worry too much about keeping things straight. This is a romp. The authors have a great deal of fun throwing up red herrings ... Political junkies will relish the veiled insults to real-life people ... may bring Penny into new fictional territory, but her imprint is everywhere. The emotional cast to the writing, the tendency to dangle portents and wait some time before resolving them, the depiction of friendship, the short paragraphs, the philosophical aperçus — these are all marks of Penny’s writing. (Lovers of her work are in for a special little treat at the end) ... If Clinton is slyly settling old political scores, she is also, sweetly, celebrating women’s support of one another later in life, and I was moved by the authors’ notes paying tribute to Betsy Ebeling, one of Clinton’s oldest friends, who died not so long ago and was an inspiration for the character of Betsy Jameson. The ending leaves open the possibility that this is the beginning of a beautiful fictional friendship ... Maybe there’s nothing competitive about celebrity spouses pairing with established novelists and publishing novels within a few months of each other. But I’m going to award the prize for Best Clinton Thriller of 2021 to Hillary.
Read Full Review >>
Rave Colette Bancroft,
The Tampa Bay Times
When politicians write novels, I usually try to avoid reviewing them ... State of Terror is a big, turbocharged, breathtaking exception: It’s one of the best political thrillers I’ve ever read ... what readers might hope for but not often get: a thriller that combines the firsthand, insider knowledge of a former Secretary of State with the writing skills of a master of suspense. Bonus feature: lots of wicked humor ... (You might recall that Clinton’s husband, former President Bill Clinton, has written a couple of political thrillers with megabestselling author James Patterson. They’ve done yeoman work, but the ladies outshine them) ... Every new discovery is more terrifying than the last, and what adds an extra layer of dread is that we know Clinton actually held this job. As each appalling detail emerged, I found myself wondering whether it had really happened ... keeps up a relentless pace, with more twists and turns and cliffhangers than I could count. Yet unlike any other thriller character I can think of, Ellen doesn’t punch anyone or shoot anyone or throw anyone out of an airplane. With her, it’s all brain work.
Read Full Review >>
Positive Ron Charles,
The Washington Post
The stakes couldn’t be higher ... It’s wholly ridiculous but consistently entertaining. In an author’s note, Penny acknowledges that after a career of writing crime novels, the idea of tackling a political thriller felt awfully intimidating. But Penny and Clinton demonstrate a sure hand at international intrigue and narrative pacing ... The real key to State of Terror, though, is its secret weapon: female friendship. Despite exploding buses and the grim prospect of nuclear annihilation, these pages are leavened by Ellen’s trusty sidekick, a retired schoolteacher based on a real-life friend of Clinton. International terrorists may have all the materials they need for a dirty bomb, but America has these two middle-aged women with a plan. Honestly, it’s not a fair fight.
Read Full Review >>
See All Reviews >>
SIMILAR BOOKS
Fiction

The Every
Dave Eggers
Mixed
What did you think of State of Terror?
© LitHub | Privacy