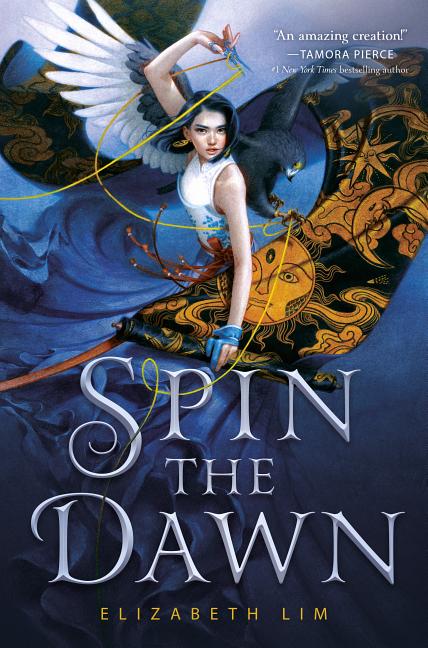 Project Runway meets Mulan in this YA fantasy about a young girl who poses as a boy to compete for the role of imperial tailor and embarks on an impossible journey to sew three magic dresses, from the sun, the moon, and the stars.

What The Reviewers Say
Rave Caitlyn Paxson,
NPR
... reminds me of the kind of books I loved as a teenager, before young adult existed as a genre ... leans into the once-upon-a-time feeling instead of trying to subvert it, and the novel revels in the folkloric essence of Chinese and European fairy tales ... Fairy tales can be skeletons for writers to craft their stories upon, and Spin the Dawn does this to great effect ... The love shared between Maia and Edan is as hopeless as it is romantic, and the wistful longing that ensues is pretty much perfect. I sometimes have issues with the trope of a centuries-old magical boy falling in love with a teenage girl, but these characters are so charming that I really didn't mind it here ... So often, fantasy seems to feel the need to focus on the most extreme characters a society has to offer, following the stories of assassins, royals, fighters and thieves. It's less common for a book to focus instead on the lives of craftspeople who build the castles, cook the feasts and sew the epic gowns that are the hallmarks of the genre. Spin the Dawn is proof that casting a wider net not only gives us a fresh story that feels unlike everything else on the shelves beside it but also allows for richer and more nuanced storytelling. It's all the little details that go into crafting the objects people use that bring a society to life, and Maia's perspective as a working tailor makes her world vibrant and full of sensory details that are sure to delight even the most jaded of fantasy readers.
Read Full Review >>
Rave Katie Ward Beim-Esche,
The Christian Science Monitor
... marries fairy tales and fashion design, and I’m here for it ... feels like a vibrant blend of Mulan and Project Runway and will instantly captivate young adult readers ... Secrets come out earlier in Spin the Dawn than I expected, leaving plenty of time for unanticipated twists. Readers may still get a kick out of solving puzzles before the characters do ... Lim, a film and video game composer, writes with the measured confidence of a lifelong storyteller. As a fellow enthusiast of fairy tales, folklore, and myths, I recognized the lilt and pacing of an orator’s cadence in Lim’s writing ... utterly charming, a melange of romance and grit that often surprises. It’s a clever and worthy addition to the YA mythological canon, and a must for any YA fan’s TBR pile.
Read Full Review >>
Positive Ellen Morton,
Washington Post
With all the cutthroat competition of a runway fashion reality show and the thrilling exploits of an epic quest, Elizabeth Lim’s Spin the Dawn weaves a stunning tapestry of adventure ... Based in the sights, sounds and stories of ancient China, the novel’s setting is one of its most rewarding aspects. Lim evokes a landscape that is distinct in the crowded field of YA fantasy titles, and she metes out information at a pace that generates curiosity — though sometimes frustration, too ... Maia’s rendering as a master artist and craftswoman is complete and believable, and she ends this first volume in a predicament that is bound to test her will and skill, and leaves the reader wanting to know what comes next.
Read Full Review >>
See All Reviews >>
SIMILAR BOOKS
Coming Soon

Ordinary Monsters
J M Miro
Positive
What did you think of Spin the Dawn?
© LitHub | Privacy