Son of the Storm 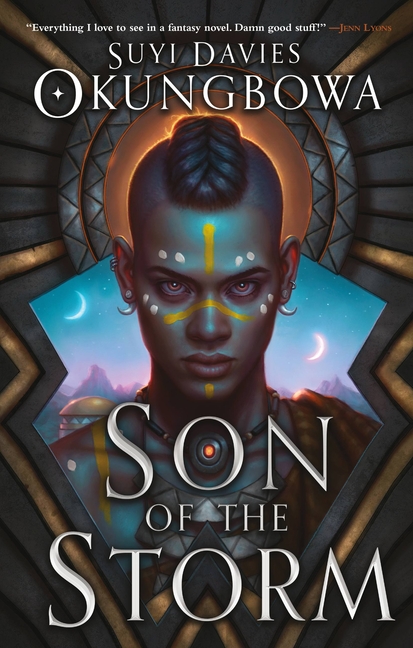 In the thriving city of Bassa, Danso is a clever but disillusioned scholar who longs for a life beyond the rigid family and political obligations expected of the city's elite. A way out presents itself when Lilong, a skin-changing warrior, shows up wounded in his barn.

What The Reviewers Say
Rave FRAN WILDE,
NPR
While this may seem like a comfortably familiar epic fantasy setup, I was delighted to discover that Son of the Storm, the first novel in the Nameless Republic trilogy by Nigerian author Suyi Davies Okungbowa, is absolutely anything but ... Instead, ambition and intrigue cause surprises on nearly every page as characters reach for power in unpredictable and nuanced ways. More importantly, the novel purposefully reveals the lure of power and the generational impact of this intrigue, both from the perspectives of the powerful, and from the points of view of those who do not, will not, or cannot, hold power ... defines these tensions clearly from the start, as a prologue whirls readers into a society already at a dangerous crossroads, at once reaching for new levels of power, and busy walling itself off from risk. The effect is rich, wild, and occasionally dizzying ... Okungbowa signals that he knows he's taking the reader on a complex ride with each detail ... It is a rare thing to be able to manage a main protagonist who stubbornly refuses to protag, and Danso — and the reactions of those around him — carries the reader through the novel ... Okungbowa's control of power, relationships, plot twists, and politics throughout gets high marks. The narrative occasionally falters when the writing gets tangled up with a character's thoughts, but it recovers quickly, often because the characters rarely have time to overthink while they're occupied with surviving the fantastic setting and the regional monsters — human and not — that make Son of The Storm well worth exploring ... rewards a second read ... I'm looking forward to seeing where we go from here — in part because the narrative leaves us once again at a crossroads (a satisfying one) where power is being managed in entirely different ways that are sure to make for more excellent stories.
Read Full Review >>
Positive Alex Brown,
Tor.com
The whole novel is strong all around, but Son of the Storm does two things very, very well: worldbuilding and character development. The world in the Nameless Trilogy feels multilayered and, well, epic. Inspired by pre-colonial West Africa, Okungbowa infuses his landscape with vivid descriptions of tastes, scents, textures, sounds, and sights. Danso and Esheme don’t just walk through the city streets; we experience it with them. The amount of detail he puts into each scene is impressive ... this is a story where the reader expects certain tropes and is surprised with some killer twists ... Son of the Storm falls into some frustratingly common tropes about biracial people. For example, Danso and other Shanshi are treated like they’re half of this and half of that but somehow still less than both, a thing I, a biracial person, am deeply tired of seeing in speculative fiction. I long for the day when we drop that from the collective trope lexicon. But I think overall Okungbowa does a solid job of showing how Danso’s difficulties as a biracial person are not caused by anything he’s done but by the oppressive caste system ... a great first book in what looks to be an exciting trilogy.
Read Full Review >>
Rave Marlene Harris,
Library Journal
Highly recommended for fans of epic fantasy based on non-European mythologies, like The Black Sun, by Rebecca Roanhorse; readers who enjoy protagonists on troubled journeys, like in Jenn Lyons’s The House of Always; or anyone who likes to chew on stories with complex shenanigans.
Read Full Review >>
See All Reviews >>
SIMILAR BOOKS
Fantasy

A Marvellous Light
Freya Marske
Rave
What did you think of Son of the Storm?
© LitHub | Privacy