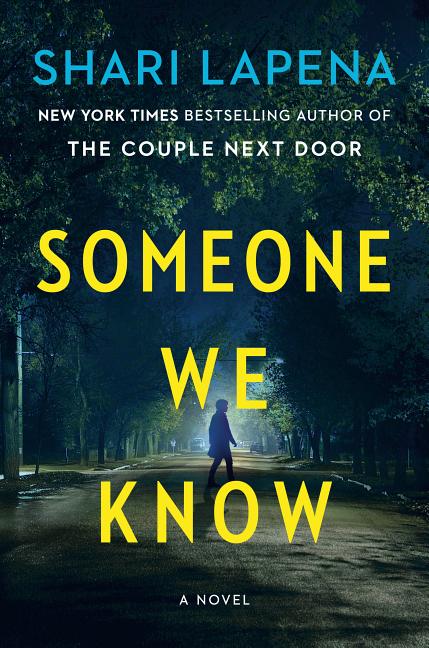 In a quiet, leafy suburb in upstate New York, a teenager has been sneaking into houses—and into the owners' computers as well—learning their secrets, and maybe sharing some of them, too. When a woman down the street is found murdered, the tension reaches the breaking point. Who killed her? Who knows more than they're telling? And how far will all these very nice people go to protect their own secrets?

What The Reviewers Say
Positive Bailey Tulloch,
San Francisco Book Review
As the title suggests, in any good whodunnit, the killer is always someone we know. But this novel, set in a neighborhood full of suspicious characters with various motives, makes unraveling the identity of the murderer nearly impossible ... While I felt Lapena’s previous books relied too heavily upon absurdities in order to 'twist' the final ending, her use of small pockets of perspective from each character in Someone We Know works effectively to create a constant of doubt. Though at times it does feel as though we may be hearing from one too many individuals, muddling the ability to gauge the importance of certain characters, the eerie premonition of what is to come that it evokes makes the confusion all worth the while.
Read Full Review >>
Positive Shoshana Frank,
Booklist
Lapena creates unrelenting psychological tension by describing how the shared illusions of a tightly knit group of people are destroyed, transforming tranquility into desperation. This highly suspenseful domestic crime novel will make readers think twice about what transpires behind neighborhood doors and to admit that appearances are often too good to be true. Sure to delight fans of Liane Moriarty and Louise Candlish.
Read Full Review >>
Mixed Publishers Weekly
... [a] slyly plotted if anemically peopled page-turner ... Lapena skillfully maximizes suspense with her dual story lines that eventually collide, as well as some deft misdirection. Unfortunately, most of her characters don’t rise above serviceable, and the final plot twists prove as implausible as they are surprising. Still, many fans of domestic suspense will be satisfied.
Read Full Review >>
See All Reviews >>
SIMILAR BOOKS
Fiction

The Devil Takes You Home
Gabino Iglesias
Positive
What did you think of Someone We Know?
© LitHub | Privacy